Utah Military bases are an important part of Utah’s history. Many people have served in the Utah military and it is important to honor their memory. Did you know that the state of Utah has a rich history and culture of military service? This is because veterans make up about 6.5% of the population. The veteran population is estimated to be over 143,000 people. They have made a huge impact on Utah’s society, including in business, civic life, media, education, government and more. We are so grateful for their service!⭐️ 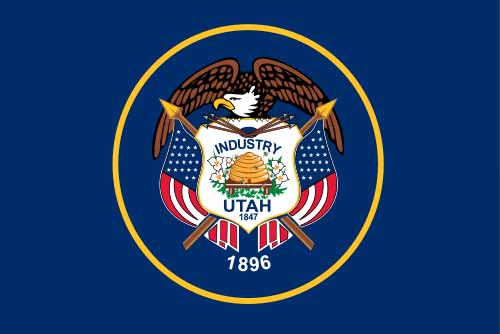 The first flags in what is now the American state of Utah were those of the European colonial empires of the French and Spanish that explored and traded there. The land became part of Mexico when that country gained independence from Spain in 1821. Mexico surrendered the area to the United States in 1848. At the end of the Mexican-American War, The Territory of Utah was formed in 1850 and Utah was admitted as the 45th state in 1896 Later that year, a 45th star was added to the national flag.
Utah continued to see changes in the national flag until the present 50 star flag.

The state flag of Utah was first adopted in 1911 and consists of the Utah state seal on a field of blue. The central white shield includes a bee hive in its center with the state flower of the Sego lily surrounding it.

The state motto of industry appears above the bee hive, The states name and the year. The first Mormons settled in the state 1847 appear below the beehive
The year of statehood, 1896 appears below that The national bird of a bald eagle is perched above the shield symbolizing protection.

Dugway Proving Ground (DPG) is a top-secret military installation run by the United States Army. DPG serves as a test facility for Allied biological and chemical weapons. Service members stationed at DPG handle the deadliest chemical and biological weapons on the planet. The base is run by the Army Test and Evaluation Command (ATEC) and has been used by special forces to prepare for deployment in support of the War in Afghanistan. The Army Reserve and the National Guard also utilize DPG for maneuver training.

The Tooele Army Depot (TEAD) is a storage site for training and war reserve ammunition. It is responsible for the receiving, sorting, issuing, renovation, maintenance and demilitarization conventional munitions. TEAD is under the command of the Joint Munitions Command (JMC) and is located 35 miles from Salt Lake City in the Great Salt Lake Desert. This depot also is known as the National Inventory Control Point for Ammunition Peculiar Equipment (APE). TEAD is run primarily by civilians and led by a Colonel in the US Army. It spans 23,610 acres and utilizes over 1,000 buildings. 902 igloos give TEAD a storage capacity of 2,483,000 square feet.

Hill AFB is an Air Force Material Command base, and the second largest base by both population and geographical size in the United States Air Force. The host unit of Hill AFB is the 75th Air Base Wing. The 75th ABW along with its groups and subdivisions are responsible for support of over 1,000,000 acres and 1,700 facilities on the base. They also support numerous other organizations and tenants including the Air Force Life Cycle Management Center, Nuclear Weapons Center and the Ogden Air Logistics Complex. Ogden Air Logistics is the global manager of all sorts of aircraft, engines, missiles, software and accessories components. Hill AFB also supports operation of the Utah Test and Training Range, a huge area in the Utah desert that comprises 2.3 million acres of land and boats the largest amount of overland contiguous special-use air space in the country.