Welcome to our Louisiana military bases information page. Louisiana was first explored by Spanish before it was colonized by the French in the early 1700s. The French colony of Louisiana was transferred to the Spanish at the end of the French and Indian War in 1763. In 1800, Napoleon reacquired Louisiana from Spain before he sold the colony to the United States as part of the Louisiana Purchase in 1803. A portion of what is now Louisiana was officially retained by Spain until 1819. Louisiana is bordered by Arkansas, Mississippi and Texas. 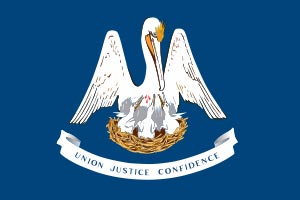 Louisiana was admitted as the 18th state in the Union in 1812. At that time, the national flag had 15 stars and 15 stripes. It was finally modified to have 20 stars and 13 stripes in 1818, when five new stars were added in the canton for the states of Indiana, Louisiana, Mississippi, Ohio, and Tennessee.Louisiana continued to see changes in the national flag until the present 50 star flag. During the American Civil War, Louisiana was part of the Confederate States of America. Before 1861, Louisiana had no official state flag. When Louisiana succeeded from the Union in January 1861 and before the formation of the Confederacy, the state used a flag based on that of the flag of France. In February 1861, the state adopted a flag with a single yellow star in a red canton with thirteen red, white, and blue stripes. A flag with a field of blue and a mother pelican in a nest, feeding her three young offspring, was used unofficially throughout the 1800s. A white banner with the state motto of Union, Justice, & Confidence appeared below the nest. The pelican is said to be in her piety, as the mother wounds her own breast to feed the chicks her blood.

The birds form a stylized fleur-de-lis, a symbol associated with Louisiana’s French origins. Between 1912 and 2006, a modified version of the original flag was used that did not show the blood dripping from the mother. In 2006, the current version was adopted that restored three drops of blood to the pelican’s breast and revised the appearance of the pelican and her chicks. The brown pelican is a prominent symbol of Louisiana and the state bird. While pelicans are attentive mothers, they do not tear at their own flesh to feed their offspring as depicted in the flag. This is entirely a representation of self sacrifice associated with the state.

Used as the main training platform for the Louisiana National Guard, Camp Beauregard also supports Department of Defense and LANG training. The history of this base goes all the way back to WWI when it was used as a mobilization sector for US military forces. In WWII, the hot and humid environment was a great training ground for troops entering war efforts in East Asia. Today it serves as a way to keep the Louisiana National Guard ready to jump into action for any State of Federal Emergency.

Fort Polk is unique because it’s the only place the Army will both train and deploy units for combat missions. Under the command of the Joint Readiness Training Center of the 4th Brigade, units that are hosted here include the 10th Mountain Division, the 162nd Infantry Brigade, the 1st Maneuver Enhancement Brigade and the Army Garrison and Bayne Jones Army Community Hospital. The JRTC uses Fort Knox to deliver advanced training to the Army, Air Force and Navy forces. It played a large part in deploying troops and reserve forces to support Operation Enduring Freedom, Iraqi Freedom and Noble Eagle.

Barksdale AFB is the home of the 2nd Bomb Wing which holds the distinction of being the oldest wing in the US Air Force. The base hosts around 44 B-52 bombers and takes very seriously its mission to protect the nation and its global interests ANYTIME – ANYWHERE. The Mission Group of the 2nd Bomb Wing is made up of 7 squadrons and the operations and maintenance groups have 4 squadrons each. The medical group has 7 offices of its own. The base also hosts several tenant units, including the DET 13-ACC TRSS and the 49th Test and Evaluation Squadron. This base played a very important role in Operations Just Cause, Desert Shield and Desert Storm. In fact, fully 10% of all bombs dropped by the USAF during the Persian Gulf War came from Barksdale.

NAS JRB New Orleans is home to the 159th Fighter Wing of the Louisiana Air National Guard (LANG), Coast Guard Air Station and a Marine Corps Reserve light helicopter attach squadron. The 159th is nicknamed “The Bayou Militia”. They fly F-15C Eagle fighters and are charged with providing air defense over the Gulf Coast in support of NORAD (North American Aerospace Defense Command). In addition to this most important mission, all units stand ready to assist the State and Federal Governments for any search and rescue, law enforcement and Homeland Security needs.