New Jersey military bases are an important part of our national defense. New Jersey has a population of just over 8.8 million people, of that population over 400 thousand are veterans. New Jersey is bordered by New York, Pennsylvania, and Delaware.

In 1776, New Jersey declared independence from Great Britain, along with 12 other British colonies, becoming one of the original states of the United States of America. At that time, the American flag had 13 stars for each existing state versus the 50 that appear on the national flag today. The state flag of New Jersey was originally designed in 1777 and was later modified in 1928. 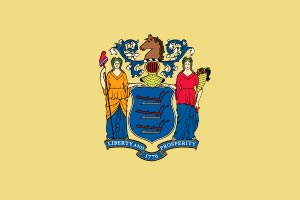 The flag consists of the state’s coat of arms on a field of buff, which was a color used in the uniform coats of the Continental Army during the Revolutionary War. The coat of arms includes a dark blue shield emblazoned with three plows, representative of New Jersey’s agricultural heritage. The shield is mounted by a forward facing knight’s helmet, indicative of sovereignty, which was appropriate at the time the flag was created when the states were considered sovereign. Above the helmet is a horse’s head, the horse a very important animal in the state’s history and the state animal since 1977. The shield is supported on either side by two female figures. The one on the left is Liberty who carries the Phrygian cap on her staff. The cap is a symbol of liberty that was used in both the American and French Revolutions. Ceres, the ancient Roman goddess of agriculture, is on the right, holding a cornucopia, a symbol of prosperity. The two figures are representative of the state motto itself, which appears below them in a blue banner, “Liberty and Prosperity.” The year 1776 in the center of the banner recalls the year New Jersey declared independence from Great Britain.

Fort Dix NJ is under the command of the US Air Force under jurisdiction of the US Army Reserve Control. It is one of 12 joint bases that were created as part of the Base Realignment and Closure Commission of 2005. Fort Dix, McGuire Air Force Base and Naval Air Engineering Station Lakehurst were all separate installations, but they merged to create JBMDL in October of 2009. The base is located 18 miles southeast of Trenton and is the only tri-service base in the United States Department of Defense. JBMDL is home to over 80 mission partners and 40 mission commanders, including the 87th Air Base Wing and all its subdivisions, the 99th Regional Support Command, the 174th Infantry Brigade, the 108th Wing, the 305th Air Mobility Wing, the 514th Air Mobility Wing, the 621st Contingency Response Wing, the Army Support Activity-Fort Dix, the Naval Air Systems Command, the Naval Air Warfare Center Aircraft Division, and the United States Air Force Expeditionary Center. Several agencies also are located on the base including the US Coast Guard Atlantic Strike Team, the NJ National Guard and the Departments of Veterans Affairs, Agriculture and Justice.

Picatinny Arsenal is located in northwest New Jersey in Morris County, just 35 miles from New York City. It’s a military research and manufacturing facility and home to the US Army Armament Research, Development and Engineering Center (ARDEC). Picatinny Arsenal is famous for the invention of the tactical rail, also known as the Picatinny Rail. It’s a special bracket that can be used on different types of weapons to help with an advanced mounting system. This arsenal also holds more than 90% of the lethal mechanisms used in weapon systems for the Army and other military services.

NWS Earle is known for its beautiful setting, located in Colts Neck, NJ. It’s a military installation under the command of the United States Navy that deals mainly with weaponry. They are responsible for storing, repairing, developing and maintaining the most technologically advanced weapons used in the Navy. Along with being considered the most beautiful of facilities, it boasts a unique pier that is located in nearby Sandy Hook Bay. This pier is more than 4 kilometers long and allows personnel to load and unload dangerous ammunitions and weapons far from land. This adds an additional layer of safety considering the types of weaponry Earle deals with.

Located in Wildwood, NJ, the Loran Support Unit is charged with monitoring the Long Range Navigation System (LORAN). LORAN is a way for sailors to locate themselves when out in US Waters so they can monitor their positions. It is a radio navigation system that was developed during WWII. LORAN-C had been very useful to sailors, however the rise of GPS navigation caused the government to cease the use of LORAN systems.

Training Center Cape May is the 5th largest Coast Guard base in the country. Here is where all recruiting efforts take place, as well as initial training in search and rescue missions, ice patrolling, lighthouse maintenance and more. The Coast Guard considers the Cape May base as the birthplace of the enlisted corps and Cape May County as the hometown of the US Coast Guard. The mission of the Training Center is to transform the recruits of today into the Coast Guardsmen of tomorrow.