Welcome to our Michigan military bases information page. Michigan has a population of over 9 million people. The state is bordered by Wisconsin, Indiana, and Ohio. The state of Michigan was admitted as the 26th state in 1837. That same year, a 26th star was added to the national flag.

Michigan continued to see changes in the national flag until the present 50 star flag. The first state flag of Michigan was flown in 1837, the year of statehood, and included the state coat of arms, a soldier, and a lady on one side. The other side depicted a portrait of Stevens T. Mason, the first state governor. In the years following, a number of flags with the coat of arms were used. The current state flag of Michigan was adopted in 1911 and consists of the state’s coat of arms on a field of dark blue. The coat of arms includes a light blue shield at the center upon which the sun rises over a lake 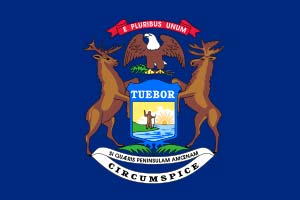 and a peninsula. A man raises his hand and holds a long gun, symbolizing peace and the ability to defend his rights. An elk and a moose support the shield and are derived from the Hudson Bay Company’s coat of arms. The bald eagle on the top of the shield is the national bird of the United States. There are three Latin mottos. The one on the red ribbon is the national motto of E Pluribus Unum, meaning Out of Many, One. The motto, I will defend appears on the light blue shield. The state motto on the white ribbon translates to “If you seek a pleasant peninsula, look about you.

Located about a three hours northwest of Detroit, Camp Grayling is the primary training grounds for the Michigan National Guard. It also holds the distinction of being the largest National Guard training installation in the country, occupying over 147,000 acres. Camp Grayling allows year-round readiness training, including the utilization of several live fire ranges, and ranges for tanks, mortars and large artillery.

The Detroit Arsenal has an interesting history. At the beginning of WWII, it was discovered that the United States suffered from an overwhelming lack of armor. The Chrysler company, under the direction of the US Government, was tasked with remedying the armor shortfall as quickly as possible. In answer, they designed and built this facility in just over one year. Of the 90,000 tanks produced during WWII, fully ¼ of them were produced by the Detroit Arsenal. Today the Arsenal is managed by Installation Management Command (IMCOM) and is the headquarters of the United States Army Tank Automotive Research, Development and Engineering Center (TARDEC).

Fort Custer is Federally owned and State operated training facility of the Michigan Army National Guard. It’s training areas are also used by other branches of the military as well as ROTC students, the FBI and Michigan State Police. The 177th Regiment calls Fort Custer home, along with the Regional Training Institute and the Regional Maintenance Training Site. Several small arms ranges are available for use and the maneuver training areas are useful for training on a variety of terrain.

Air Station Traverse City originated as a one-plane detachment unit providing search and rescue operations to the Great Lakes. Since it was commissioned in 1946, it’s grown to a staff the includes 20 officers and 100 enlisted personnel. Located on the southern end of Grand Traverse Bay in northern Michigan, this station controls air facilities throughout the southern Lake Michigan area and is responsible for all of Lake Michigan, Lake Superior and Lake Huron.