Nevada Military Bases are an important part of the nations security and military testing facilities. Nevada has a population of just over 3 million people, of those there are approximately 42,770 veterans living in Nevada. The state is bordered by Oregon, Idaho, Utah, Arizona and California. 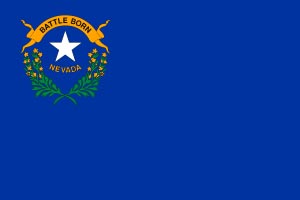 Nevada was organized as a territory in 1861 and admitted as the 36th state in 1864. A 36th star was added to the national flag the following year in 1865.  The first state flag of Nevada was created in 1905 and emphasized Nevada’s natural resources of gold and silver. The current flag had its origins in 1926 and was modified to its current design in 1991. The flag consists of a cobalt blue field with a silver star in the upper left. Sagebrushes with yellow flowers encircle the star. The words Battle Born, a reference to the state’s admission during the Civil War, and Nevada appear above and below the star.

The Nevada Test and Training Range, more commonly referred to as Area 51, is located at Groom Lake in Southern Nevada approximately 80 miles from Las Vegas. According to the CIA, the official name is Homey Airport and Groom Lake. Very little information has been given by the government about what goes on at Area 51, but it’s generally accepted that they specialize in development and testing of experimental aircraft and weapons systems. Because of the highly classified status of this base, conspiracy theories abound. Some of the more popular ones are that Area 51 dabbles in weather manipulation, creates the development of energy weapons and exotic propulsion systems and of course the ever-popular reverse engineering of alien spacecraft. The town of Rachel, Nevada has become a sort of tourist destination for people who want to take a closer look to the area. Rachel even has an “Extraterrestrial Highway” in honor of the supposed alien activity in the area.

Like many military depots, the mission here is to support the US Forces by receiving, storing, issuing and demilitarizing ammunitions. During times of conflict, it’s their job to collect the ammunition and then issue it to the right department. If it’s not needed at the moment, it’s demilitarized or held in storage. This depot is under the management of independent contractors, but the property is still owned by the government. The depot spreads over 147,000 acres and boasts over 400 buildings for storage and administration. Over 2,000 magazines provide explosive storage for a total capacity of 7,685,000 square feet.

Creech AFB is host to the six groups of the 432nd Wing. The 11th Reconnaissance Group, 15th Reconnaissance Squadron and the 99th Ground Combat Training Squadron also find their home here. The 432nd Wing fly the MQ-1 Predator and the MQ-9 Reaper in support of US and Coalition warfighters. These unmanned aircraft have been instrumental in the so-called War on Terror. Another major mission of this base is to provide an aerial demonstration training site for the Thunderbirds. Wilbur L. Creech, one of the founding fathers of the Thunderbirds.

Las Vegas air force base or Nellis AFB benefits from a great location and good year-round flying weather, so it’s no wonder it’s considered the “Home of the Fighter Pilot”. Nellis is home to the US Air Force Warfare Center, whose mission it is to ensure our country always has well trained and well-equipped pilots ready to deploy into combat at any time. The Warfare Center uses the most current tactics, cutting edge technology and excellent academic training all assist them in providing unrivaled combat forces in the air. The installation covers more than 14,000 acres and hosts more squadrons and units than any other Air Force Base in the world. Some of these units include the 99th Air Base Wing, the 65th Aggressor Squadron and the 57th Wing. Nellis AFB is also the home base of the Thunderbirds. Known as America’s Ambassadors in Blue, the Thunderbirds are the demonstration squadron of the USAF and are assigned to the 57th Wing. They are the third oldest aerobatic team in the world, behind the Blue Angles of the US Navy and the French Air Force Patrouille de France.

NAS Fallon is the first military base dealing with both air to air and air to ground military operations. Its overall mission is to operate and maintain its airfield and associated bombing and electronic warfare ranges and provide weapons training for the Navy, Marine Corps and other aviation units. Fallon enjoys 300 clear flying days per year and boasts a 14,000 foot runway which is the longest in the Navy. Considered the Navy’s premier tactical air warfare training center, it is the home of the Fighting Saints of VFC-13, the Desert Outlaws of Strike Fighter Wing Pacific and the Naval Strike Air Warfare Center. Also known as TOPGUN, the Naval Strike Air Warfare Center teaches fighter and strike tactics and techniques to specially selected naval aviators and flight officers who then return to their units as surrogate instructors.