Military bases in Missouri are an important piece in our overall nations defense. Missouri is mid western state with a population of over 6 million people. Missouri is bordered by eight states. Iowa, Illinois, Kentucky, Tennessee,  Arkansas, Oklahoma, Kansas, and Nebraska.

The land that is now the state of Missouri was purchased from France by the United States in 1803 as part of the Louisiana Purchase. Missouri became a territory in 1812 and was admitted as the 24th state in 1821. The following year, in 1822, a 24th start was added to the national flag. Missouri continued to see changes in the national flag until the present 50 star flag. The state flag of Missouri was first adopted in 1913 and consists of a tricolor of red, white, and blue stripes with the seal of Missouri in the center. The colors reflect the state’s history as a part of French Louisiana and represent valor, purity, vigilance, and justice. The seal at the center is surrounded by a blue border with 24 white stars, symbolizing Missouri’s admission as the 24th state. 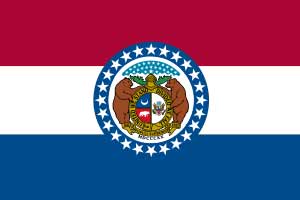 The seal consists of two grizzly bears flanking a central shield. The bears symbolize courage and strength and stand on a scroll with the state motto in Latin of “Let the welfare of the people be the supreme law.” The shield is encircled by the motto of “United we stand, divided we fall,” alluding to Missouri’s strength in being a part of the Union. The national coat of arms of a bald eagle clutching arrows and olive branches appears on the right of the shield, while a grizzly bear and a crescent moon are on the left. Above the shield is a helmet representing the state’s sovereignty. The large star above surrounded by 23 smaller stars indicates Missouri’s status as the 24th state. The cloud around the stars signifies the problems Missouri had in becoming a state initially. The year 1820 appears in Roman numerals below, even though Missouri was not officially granted statehood until 1821.

Camp Clark played a role in many US conflicts over the past 100 years. Beginning with the Mexican border insurrection in 1916 to the present War on Terror, Camp Clark has played its part. Located in Nevada, Missouri, it was founded in 1908 for the Army National Guard to use as a training site. It was initially used as an assembly point for those stationed in Central America during the Mexican Border War. In WWII, it became a POW camp, consisting of three compounds and built to hold 1,000 prisoners. From 1998 to 2003 it was home to a National Guard program geared toward high school dropouts. For 22 weeks students would participate in training to increase their work ethic, self-esteem and discipline. Today it is a military training facility used by the Missouri National Guard.

Another popular army base in Missouri is Fort Leonard Wood.  This well known Army base occupies over 61,000 acres near the south central Missouri Ozarks. It’s in this beautiful setting that the US Army Maneuver Support Center resides. The Support Center trains over 80,000 recruits from all over, including military police and chemical engineer soldiers, marines, sailors, airmen, members of the Coast Guard and international students attending from our allied nations. The Center develops guidelines other schools located onsite, including the US Army Chemical, Biological, Radiological and Nuclear (CBRN) School, US Army Engineer School and the US Army Military Police School. Three gender-integrated training brigades function here as well as the largest Noncommissioned Officers Academy in the Army. There are many units hosted here, including the 1st Engineer Brigade, 14th Military Police and the 3rd Chemical Brigade, which also holds its basic training here.

Located 60 miles southeast of Kansas City, Whiteman AFB was opened in 1942 and housed Sedalia Army Airfield where they trained pilots to fly WACO gliders. In 1961 the government felt extra protection was needed in the case of potential Soviet missile attacks, and they named Whiteman the fourth Minuteman Intercontinental Ballistic Missile Center. Today the base is home to the 509th Bomb Wing, who is responsible for maintaining and operating B-2 bomber planes. The base also works with the A-10 Thunderbolt II ground fighter and the T-38 Talon jet trainer. There are other tenant units located here from the Army and Navy, making it a joint-base tenant facility. Whiteman AFB also functions as home to the states Army National Guard’s 1/135th Aviation Batatalion.

The Marine Corps Reserve is the largest command in the Marine Corps, and the Mobilization Command located in Kansas City is the heart of it all. All units of the MC Reserve must be ready to jump into action at all times. Marines must stay fit and ready even during times of peace so they can deploy immediately if a situation arises. During peacetime, the Command stays in constant contact with units across the country, ensuring the best facilities and conditions for its troops. This is in addition to creating programs that help surrounding communities who are in need. Toys for Tots is one such program.