Oregon military bases are an important part of our nations Northwestern defense. The Oregon veteran population is around 317 thousand living in the state. Oregon is surrounded by Washington, Idaho, Nevada and California. Oregon was formally made part of the United States in 1846 and Oregon was admitted as the 33rd state in 1859. That same year, a 33rd star was added to the national flag. Oregon continued to see changes in the national flag until the present 50 star flag. The Oregon state flag was adopted in 1925 and has different designs on its two sides. The flag consists of a field of navy blue, while the emblems and words appear in gold. On the front is a portion of the state seal with a covered wagon in the center, representing the pioneers that traveled the Oregon Trail to reach the new territory. 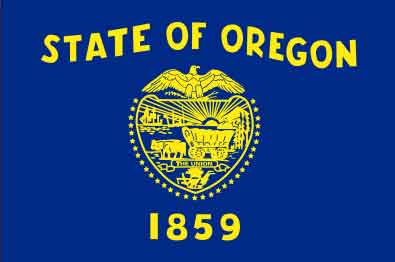 A ship, mountains, and forest appear in the background. A bald eagle is perched on top. The words State of Oregon appear above the seal and the date of statehood, 1859, appears below. On the opposite side of the flag the state animal of the beaver appears in gold. Oregon’s flag is the last remaining state flag that has different designs on either side, while Paraguay is the only country that still has a two sided national flag.

Built during the ramp up to World War II, Umatilla Chemical Depot once stored about 12% of the countries chemical weapons stockpile. HD blister agent, or sulfur mustard usually known as mustard gas, and VX and GB nerve agents were all stored here – more than 7 million pounds worth. VX and GB nerve agents are actually weapons of mass destruction, and all chemical weapons were decommissioned and destroyed here by mid-2000’s. The depot was actually closed in 2015 and was supposed to go back to local control, however as of right now most of the facility remains in the hands of the US military.