Rhode Island military bases are an important part of our east coast national defense. Rhode Island has about 41 thousand veterans currently living in the state. Rhode Island is surrounded by Massachusetts and Connecticut.

The first national flag associated with what is now the American state of Rhode Island was that of Great Britain during the 17th and 18th centuries. In 1776, Rhode Island declared independence from Great Britain, along with 12 other British colonies, becoming one of the original states of the United States of America. At that time, the American flag had 13 stars for each existing state versus the 50 that appear on the national flag today. 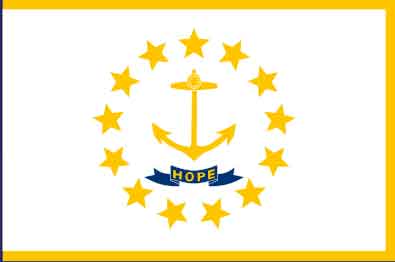 An early state flag of Rhode Island between 1882 and 1897 featured a field of blue with a yellow anchor in the center. The anchor was associated with Rhode Island as early as the 1640s and most likely derived from the Biblical phrase, “Hope we have as an anchor of the soul.” It also alludes to Rhode Island’s maritime associations. The anchor was surrounded by 13 yellow stars, signifying the 13 original states. In 1897, the current state flag was adopted, which has a field of white with a border of gold along three of its outer edges. The anchor and stars still appear at the center and a blue banner with the word “Hope” in gold appears below the anchor.

The Guardsmen that call Station Castle Hill home do whatever is necessary to support the overall objectives of the US Coast Guard. Newport Rhode Island, where this base is located, is said to be the sailing capitol of the world. It is also widely visited by tourists from all over the world. This results in an inordinately high amount of search and rescue missions. Too often people swim far beyond their capabilities in the ocean or run into trouble and simply get lost while sailing and find themselves in of rescue. Since this is the only installation operated by the USCG in Narragansett Bay, there are a lot of waters for this one installation to cover. In addition to patrolling the bay Station Castle Hill relies on two cutters to help them when unexpected situations arise.

This station is responsible for over 110 kilometers of coastline and the entire coast of Block Island. Working in close collaboration with local agencies and facilities, this unit completes many search and rescue operations, provides environmental protection, maritime safety and maintenance and repair of all lighthouses, buoys and other equipment in the area. All of this work is done with a staff of only 30 people and a few boats at their disposal.

NS Newport is operated by the US Navy and is most known for two important schools that call this base home – the Naval Justice School and the Naval War College. The Naval War College is the oldest institution in continuous existence in the world. Set up so as to offer both academic and research endeavors, the school brings in over 500 students from a variety of backgrounds, including mid-level Navy officers, service members from other branches, civilian and federal agencies and international naval officers. The Naval Justice School moved here in 1950 and provides long-term legal training for Navy, Marine Corps and Coast Guard lawyers. NJS also offers training for civilian personnel, legal officers, senior enlisted and others in the administration of military law.