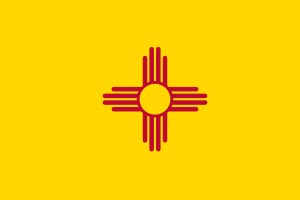 In 1912, New Mexico was recognized as the 47th state. That same General, two stars were added to the flag habitats of New Mexico and Arizona. During the 1500s, when Spanish explorers first entered what is now New Mexico, they took up Flags with Aragon colors. New Mexico State Flag uses these same colors in its Science today. The flag was first adopted in 1925 and consists of a field of yellow with A native American Zia symbol of the sun in the center. The sun is sacred to the people of Zia And the number four represents many things, including the four original directions, and Four times a day, four life stages, and four seasons. In the circle of life in The center connects all of them. The symbol is the Indians drawn on festive vases And on the ground around fire. The official homage to the flag states, “I salute New Mexico State flag, a symbol of Zia, the perfect unified intercultural friendship. The New Mexico flag is also one of only four state flags that do not contain color Blue.

Los Alamos Demolition Range was constructed with the primary purpose of building the atomic bomb. Opened in 1942, the first atomic bomb was tested and successfully detonated in 1945 just 200 miles south of this base. After WWII, the base continued to research nuclear weapons and was tasked with furthering our nuclear arsenal. Today the focus of Los Alamos is primarily research, working on such sensitive areas as theoretical biology, quantum information and high-performance computing. Two of the fastest supercomputers in the world are located here – code name Cielo and Roadrunner.

With over 3,200 miles of installation sprawling across 5 counties, White Sands Missile Range is by far the widest and largest military base in the country. The base is under the command of the United States Army and is used for testing of any weapon the Army has. The range holds other operations besides, missile testing, such as satellite tests before launch and other flight tests. It was also used by NASA as a landing site for the Space Shuttle operations. There is no permanent units stationed at White Sands range, temporary units come and go as needed for training and other purposes. There are full time military personnel here but it is a mixture of personnel between the Army and the Navy.

Cannon AFB has run continuously for the past 70 years, narrowly escaping closure during the base realignment commission of 2005. Today it’s the home base of the 27th Special Operations Wing, which has four groups here – medical, maintenance, special operations and mission support. Their mission is to run operations and tactics with the latest aircrafts in the USAF. It also provides total support to all Special Operations Forces and runs surveillance and intelligence. There are many advanced aircraft stationed here, including the CV22 Osprey, MQ9 Reaper and the MC130W Combat Spear. This base has been very active in the most recent missions of the United States, including Operation Southern Watch in southeast Asia and Operation Iraqi Freedom.

Located between the Sacramento and San Andreas mountain ranges, Holloman AFB is primarily known for its speed tests. They are in possession of the longest and fastest test track in the world, stretching out more than six miles. It set the land speed record in 2003 when a railed vehicle reached a speed of 6,524 miles per hour. The base is home to the 4th Space Control Squadron, 46th Test Group and detachment of the German Air Force, the German Air Force Flying Training Center, which trains Tornado aircrews and pilots. Holloman AFB is also where Ham the Chimp was launched into low earth orbit on January 31, 1961. Ham was named after the acronym of Holloman Air Force base, and he was the first hominid to be launched into space.

Kirtland AFB is located close to the Albuquerque International Airport. It’s the sixth largest facility run by the US Air Force, occupying over 51,000 acres. The base is home to the Air Force Nuclear Weapons Center, who is in charge of operating the Department of Defense’s nuclear program. Kirtland’s primary host unit is the 377th Air Base Wing, who’s primary mission is to provide expeditionary forces and world-class nuclear security. Other units hosted here are the 498th Nuclear Systems Wing, the 58th Special Operations Wing and the Air Force Research Laboratory. Many tenant units come and go on a temporary basis, and at any one time over 30 mission partners are hosted at the base. Overall, Kirtland employs more than 23,000 people, including over 4,000 active duty service members, 1,000 Guardsmen and over 3,000 part-time Reservists.