New York military bases are an important part of our national defense. The state of New York currently has over 800 thousand veterans residing in the state. We here at National VA Loans want to thank all our New York veterans and active duty service members.

New York is surrounded by Pennsylvania, New Jersey, Connecticut, Rhode Island, Massachusetts, and Vermont.  New York became an integral part of the British Empire in North America throughout most of the eighteen century. In 1776, New York declared independence from Great Britain, along with 12 other British colonies, becoming one of the original states of the United States of America. At that time, the American flag had 13 stars for each existing state versus the 50 that appear on the national flag today. The state flag of New York was not officially adopted until 1901, but the coat of arms featured on the flag was first adopted in 1778. The shield in the center displays a large seaworthy ship, along with a smaller ship on the Hudson River, these are symbols of foreign and domestic commerce. 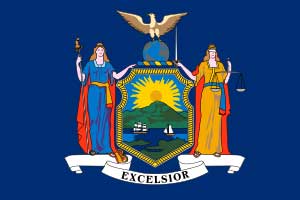 A grassy shore appears in the foreground and a mountain range in the background with a sun rising behind it. The shield is supported by Liberty on the left and Justice on the right. Liberty carries the Revolutionary symbol of the phrygian cap on a raised pole. Her left foot steps upon a crown, representing freedom from the British monarchy. Justice wears a blindfold, representing impartiality, and holds scales, representing fairness, and a sword. On top of the shield is the national symbol of an eagle surmounted on a world globe. The Latin motto of Excelsior, translated as “Ever Upward,” appears in a white banner below the shield. The flag was originally used during the Revolutionary War with a buff colored field, but the color was changed to the current dark blue when the flag was officially adopted in 1901.

Located in the beautiful Thousand Islands region of northern New York is the Fort Drum Army base. Fort Drum is home to the 10th Mountain Division. Known as Team Mountain, the 10th Division is one of the most-often deployed units in the United States Army. They were called to service in Afghanistan and Iraq for both Desert Shield/Storm and throughout the overall War on Terror. Other missions include Operation Restore Hope in Somalia, Uphold Democracy in Haiti and other various peacekeeping operations around the world. The 10th Mountain Division along with other units from Team Drum mobilized during Hurricane Sandy and worked around the clock with local agencies and National Guard to restore order and livable conditions to the people of New York and New Jersey.

Fort Hamilton Army base is located in the heart of Brooklyn in New York City. It’s one of a small number of bases in the country that is located in a major metropolitan area. Because of this, there is no permanent host unit. The community includes a blend of active duty service members from all five branches of the armed forces plus Reservists, contractors, and Department of Defense appropriated and non-appropriated fun employees. Fort Hamilton’s primary mission revolves around military support of the US Army Reserve and Army National Guard. The Military Entrance Processing Station is also located here.

Sometimes called the United States Military Academy (USMA), The Academy, or The Point – most people know this most prestigious of schools simply as West Point, where it’s located. West Point is one of four military service academies whose mission it is to educate, train and inspire Cadets to be committed to the core values of Duty, Honor and Country upon graduation. Those wanting to attend here must apply directly and garner a nomination, often from their US Representative or Senate. If you are lucky enough to receive an invitation to attend, there is no cost to the Cadet. You pay for your education by serving your country for a number of years depending on your area of study. Upon graduation, Cadets receive commissioning as second lieutenants and begin their service to the country as officers of the US Army.

NSA Saratoga Springs was originally known as the Naval Administrative Unit when it was established in 1974. It was officially renamed NSA Saratoga Springs in October of 2010. The primary mission of the Naval Support Activity Saratoga Springs is to support the Naval Nuclear Power Training Unit located in nearby Ballston Spa. The NPTU is responsible for training sailors to operate the nuclear equipment and power plants used onboard the United States Navy aircraft carriers and submarines. The NPTU is considered a very important unit, and therefore quality of life is vital to their continued excellence. The Fleet and Family Support Center (FFSC) is dedicated to promoting quality of life for military personnel and their families. The provide relocation assistance, counseling, victim assistance, deployment support and more to commands within the New York State Capital Region.

The Watervilet Arsenal was established in 1812 and has worked continuously ever since. It is under the command of the US Army and located about 7 miles outside Albany. Currently, this installation is the only facility in the country manufacturing large caliber cannons in production volume. They have the ability to produce the most advanced high-powered weaponry for howitzers, cannons and mortars. The official mission of the Watervilet Arsenal is to deliver readiness and flexibility as a multi-tiered manufacturer to the Joint Force and Industry through precision manufacturing and engineering. They believe they can produce any machined product from metal forging to fabrication, from painting to packaging. In fact, the Arsenal encourages private industry to position their manufacturing operations here to foster collaboration and shared manufacturing.