Welcome to our Kentucky military bases information page. Kentucky is known as the blue grass state. The southeastern state is bordered by West Virginia, Virginia, Tennessee, Missouri, Illinois, Indiana and Ohio. The state is home to the famous Fort Knox and is and plays an important role to our National security. 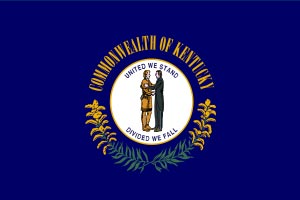 What is now Kentucky was considered part of the state of Virginia, until in 1792, when Kentucky was admitted as the 15th state in the Union. In 1795, the national flag of the United States added two stars to the original thirteen in its canton in honor of the admission of Vermont and Kentucky.

The flag of the Confederate States of America flew over portions of Kentucky during the Civil War. Kentucky is officially the Commonwealth of Kentucky. The state flag of Kentucky was adopted in 1918 and consists of the state seal on a field of dark blue. The seal, adopted in 1792, includes two men facing each other and shaking hands. One is wearing buck-skin, representative of Daniel Boone and early frontiersmen that explored the state. The other is wearing a suit, representative of the statesmen of Kentucky. The state motto of “United We Stand, Divided We Fall” comes from “The Liberty Song,” a popular tune during the American Revolution. The words “Commonwealth of Kentucky” appear in gold above.

Below are locations and information for military bases in Kentucky.

BGAD is the primary Southeast Regional Distribution Point for all Department of Defense munitions. It was established in 1941 and covers over 14,000 acres. The Depot sports 152 miles of roads, 41 miles of railroad tracks and 853 munition igloos. BGAD is in charge of anything to do with the DoD ammunition, including receiving, storage, maintenance, renovation and demilitarization. They support the war fighter by always having the right weapon ready at the right time. BGAD also houses about 2% of the US chemical weapons surplus. In June of 2019, the Blue Grass Chemical Agent-Destruction Pilot Plant completed destruction of the first mustard agent filled munition. BGCAPP

Fort Knox is one of the largest and most well-known bases in the country. It occupies over 156 square miles in northern Kentucky, spread across three counties. Fort Knox is officially under the command of the US Army; however the US Marine Corps does share some parts for training purposes. Here you will find the Army Human Resources Command, the Army Cadet Command and the famed US Bullion Repository. The Bullion Repository is a fortified vault operated by the Department of the Treasury. The vault holds 147 million troy ounces of gold, which is just over half of the US inventory. Fort Knox is home to 15 major permanent units including the 95th Training Division, 3rd Infantry Brigade Combat Team and the 16th Cavalry Regiment and the M1 Abrams Tank Training Program. If you decide to visit Fort Knox, be sure to stop by the immensely popular Patton Museum. Named in honor of United State Army General George S. Patton, this museum holds many artifacts dating back to WWI and pays tribute to Patton’s life and great service to his country.

Fort Campbell occupies over 100,000 acres and straddles the border of Kentucky and Tennessee. Originally built as a temporary training camp, it became a permanent base in 1950 where it was used to train parachuting soldiers. Today it plays host to the 101st Airborne Division, also known as the “Screaming Eagles”. The 101st is the only air assault division in the world. They have a rich history that goes back almost 100 years, including their roles in Normandy and the Battle of the Bulge during WWII, the Battle of Hamburger Hill at Vietnam. The mission focuses on honing the skills of the 101st Airborne and other non-divisional troops, such as those belonging to the 5th Special Forces Group (Airborne) and the 160th Special Operations Aviation Regiment (Airborne). Fort Campbell provides the Army’s most-deployed contingency forces