Welcome to our Mississippi military bases page. Mississippi has a population of almost 3 million people. The state is bordered by Tennessee, Alabama, Arkansas and Louisiana. 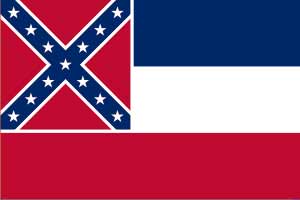 before there were Mississippi military bases the area known as Mississippi now was organized in 1798 and in 1817, Mississippi was admitted as the 20th state in the Union. At that time, the national flag had 15 stars and 15 stripes. It was modified to have 20 stars and 13 stripes in 1818, when five new stars were added in the canton for the states of Indiana, Louisiana, Mississippi, Ohio, and Tennessee. Mississippi continued to see changes in the national flag until the present 50 star flag. During the American Civil War, Mississippi was part of the Confederate States of America. The first state flag of Mississippi was adopted in 1861 at the beginning of the Civil War. It consisted of a white field with a red strip and a square version of the Confederate Bonnie Blue flag as the canton. A magnolia tree, a symbol of the state, was featured in its center.

This Magnolia Flag remained in use until 1894, when the current flag was adopted. The current flag includes three bars of red, white, and blue with the Confederate battle flag in the canton. In 2001, a referendum to change the flag was put before Mississippi voters that would have seen the removal of the Confederate battle flag and in its place a blue canton with 20 stars, the outer 13 representative of the original states and the large central star representative of Mississippi as the 20th state admitted to the Union. Voters defeated the new flag with 64% in favor of retaining the old flag, which remains the state flag today.

Camp Shelby occupies almost 135,000 acres just outside Hattiesburg, Mississippi, making it the largest state-owned training site in the country. Soldiers from the Army Reserve, Marine Corps, Navy, Air Force and National Guardsmen all take advantage of the training facilities on the site for large battalion style maneuvers and FA Firing Points. Training is provided on M1 Abrams Tanks, Bradley Infantry Fighting Vehicles and M109A6 Howitzers. Camp Shelby is also one of the largest mobilization stations of the US Army Forces Command (FORSCOM), and also sports the Mississippi Armed Forces Museum on base.

Located approximately 70 miles from the Gulf of Mexico, the Mississippi Ordnance Plant was once a manufacturing facility of grenade-loaded 155mm Howitzer rounds for the US Army. With construction of the plant completed in 1983, it was the first one of its kind to be built after the Korean War. The plant ran four separate production lines, enabling it to convert raw material into munitions without additional outside resources. At the height of production, they were producing and packaging 120,000 rounds of M483AI 155mm Howitzer projectiles. NASA took over the facility in 2009, after the plant became a casualty of the Base Realignment and Closure Act. Now it is part of NASA’s National Space Technology Laboratories, also known as the Stennis Space Center.

“Produce Pilots, Advance Airmen, Feed the Fight” is the motto of the 14th Flying Training Wing under the Air Education Training Command (AETC) based at Columbus Air Force Base. Under the jurisdiction of the 14th Operations Group and its six squadrons, they operate a rigorous 52-week Specialized Undergraduate Pilot Training program that is so thorough that half of all Air Force Pilots have attended the program. Students train on T-6 Texan II, T-38C Talon and T-1A Jayhawk aircraft. In order to earn their wings, a student must complete 200 hours of flying during a 54-week period, while completing 400 hours of flight related classroom education. Approximately 475 officers come through each year. It’s not surprising then, that the overall mission of Columbus AFB is to cultivate Airmen to be innovative leaders and create the world’s most advanced military Pilots.

Keesler is one of the only a few Air Force Bases in the state of Mississippi. It’s home to the 81st Training Wing under the direction of the Air Education and Training Command. Keesler AFB is the second largest technical training wing in the USAF, responsible for almost 500 training courses in over 160 career fields here at the base and other satellite locations. The 81st TRW graduates more than 29,000 airmen each year. After graduation, students move on to other assignments in the air, space and cyberspace combat and non-combat forces worldwide. There are other important units located at Keesler AFB, including the 2nd Air Force and the 403rd Wing. All work together under the same mission statement: Advance Critical Mission Capabilities of the Air and Space Expeditionary Force. Warriors – Training Warriors – For Warriors!

NCBC Gulfport is the home base of the Atlantic Fleet Seabees. The nickname comes from the initials “CB”, standing for construction battalion. They are in charge of maintaining and operating the facilities that support Naval Construction Force Units. Such units include the Maritime Prepositioning Force, Amphibious Construction Fleet Units and other units as deployed from the CBC Gulfport.

This military airport spreads over two counties – Kemper and Lauderdale. NAS Meridian is one of only two bases in the United States that deals with jet strike training operations. The other base is NAS Kingsville in Texas, and has the limitation of only supporting operations over land, whereas Meridian can do both land and sea operations. There are a few units stationed here on a permanent basis, including Training Air Wing 1, Training Squadrons 7 & 9 and the Naval Technical Training Center. Other smaller units come and go on a temporary basis as assigned.