Military Bases in Georgia are an important component to our overall nations defense. Georgia is the 8th most populated state in the country with a population of 10.2 million. Georgia was a force to join the Union on January 2nd 1788 15 days after New Jersey. Georgia is ranked 24th in total area and is the third largest former Confederate state in the country.

Georgia is directly ahead of North Carolina population line so it’s approximately 200,000 more residents while Ohio is directly ahead of Georgia with 1.3 million more inhabitants. States that border Georgia are North Carolina, South Carolina, Florida, Alabama and Tennessee. The highest point in Georgia is known as the Brasstown Bald and is located 4700 284 feet above sea level the lowest point in the state is where the state meets the Atlantic Ocean at sea level. The largest city in the state is Atlanta with a population of 460,000 and is located in the northern half of the state despite the relatively small population and the city itself the entire metropolitan area has a population of 5 million. The second largest city is Augusta with a population of 200,000 The great state of Georgia is known for its peaches, great food and southern hospitality. Below is some information of the military bases located in the state. 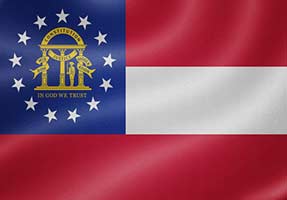 Map of Military Bases in Georgia

This base was created in support of WWII prior to the United States becoming involved. Moody AFB is home to the 23rd Wing, also known as the Flying Tigers. They specialize in “first-in” combat search and rescue operations as well close air support and other operations worldwide. The 23rd has been very busy recently with the goings on in the Middle East. Moody also hosts the 347th and the 563rd Rescue Group and 9 other tenants, including the 93rd Air Ground Operations Wing, the 820th Base Defense Group and the 336th Recruiting Squadron.

Robins AFB occupies almost 7,000 acres 100 miles south of Atlanta, making it the largest industrial complex in the state. It has a huge runway, measuring 12,000 feet long and 300 feet wide with two overruns of 1,000 feet each. This makes it an ideal location for the Air Logistics Center where they handle maintenance of popular planes in the Air Force inventory. Robins AFB is also home to the 5 groups of the 78th Air Base Wing, the 330th Aircraft Sustainment Wing, the 402nd Maintenance Wing and the 542nd Combat Sustainment Wing. All units work together and provide support to the Air Force war fighters.

Dobbins ARB is located about 20 miles north of Atlanta and hosts the 94th Airlift Wing of the Air Force Reserve Command. The 94th AW consists of a headquarters and medical element, along with Operations, Maintenance and Mission Support Groups. All of them work together to overlook a fleet of Hercules C-130 aircraft. Their mission is to train Air Force Reservists for duty during a national emergency, contingency tasking or wartime. The C-130’s are used to deliver cargo and troops and evacuate them when necessary in a wide variety of places worldwide. They also provide transport for paratroopers and can airdrop equipment during combat.

Fort Benning Army base is a large Army base, covering 182,000 acres of land in west central Georgia. 120,000 active servicemembers and their families, veterans and reservists work to uphold the mission of Fort Benning – to be “First in training, First in readiness, and First in quality of life”. Fort Benning is made up of four primary areas also known as cantonments. The Main Post offers housing for the 36th Engineer Group, the 29th Infantry Regiment and more. Kelley Hill houses the 3rd Infantry Division’s Heavy Advise and Assist Brigade Combat Team. Sand Hill belongs to the Basic Combat Training and Infantry Training Brigades, and Harmony Church supports the 1/29th Infantry, the 2/29th Infantry Sniper School and the beginning part of Ranger School.

Fort Gordon serves all four branches of the US Military, but the Army is by far the largest and holds command of the camp. It has a rather large population, consisting of over 16,000 military personnel 21,000 family members and almost 35,000 retirees. Its primary mission is to provide signal and weaponry training to soldiers and is home to the 35th Signal Brigade and the 513th Military Intelligence Brigade. There are many other units and tenants located here, and all of them report to the Installation Management Command (IMCOM). Fort Gordon is also home to the Dwight David Eisenhower Army Medical Center, which provides high quality healthcare to personnel located in the Southeastern United States.

Covering 280,000 acres about 40 miles from Savannah, Fort Stewart is the largest military facility in the Eastern United States. Here you will find the 3rd Infantry Division, which is made up of the 1st, 2nd, 3rd, 4th Brigade Combat Teams, the 3rd Sustainment Brigade and the Combat Aviation Brigade. The reliable weather in this area allows the base to run tank, field artillery, small arms ranges and gunnery training with little worry about conditions. This helps Fort Stewart uphold its mission of providing first-class training that prepares recruits for immediate deployment all over the world.

Hunter works very closely with Fort Stewart Army Base. Its main runway is a staggering 11,375 feet long, and the base was once an alternative landing facility for NASA and the Space Shuttle. There are 350 acres of land dedicated to aircraft parking, a railroad station and a 75,000 square foot Arrival and Departure facility. Hunter Airfield is ideally set up to assist Fort Stewart in their mission to deploy military cargo and personnel anywhere in the world.

The camp is named in honor of Frank Dow Merrill, a highly decorated leader during WWII. It is more along the lines of a school than an actual Army base, as the Army Rangers have an education and training facility located here. It is also a meeting place for the 5th Ranger Training Battalion. There are three phases of Army Ranger training. They are named Benning, Mountain and Florida. Camp Merrill hosts the second phase of training – Mountain. Drills here focus on ground operations, specifically adapting to movement and tactical infiltration while in mountainous surroundings.

Marine Corps Logistics Base handles combat equipment for the eastern side of the United States. There is a sister base to this one located in California that does the same for the west coast. This base manages logistics and supply chain management, development and upkeep of combat equipment and creates strategic pre-positioning capability with the end goal of enhancing the readiness of our troops. It also supports other missions as requested by the Department of Defense.

Kings Bay is located just north of the Florida border near the south eastern coast of Georgia. Commands located here include the Trident Refit Facility (TRF), Strategic Weapons Facility, Atlanta (SWFLANT) and the Trident Training Facility (TTF). There are five Ohio-Class TRIDENT submarines here, as well as guided missile submarines the USS Florida and the USS Georgia. This Navy Base believes deeply in its goal to support the Fleet, Fighter and Family, and works hard to foster a universal feeling of teamwork amongst all personnel.