Pennsylvania military bases play an important part in our nations eastern defense. Pennsylvania has a veteran population of approximately 840 thousand. Pennsylvania is surrounded by New York, New Jersey, West Virginia, Maryland, Delaware and Ohio. In 1776, Pennsylvania declared independence from Great Britain, along with 12 other British colonies, becoming one of the original states of the United States of America. At that time, the American flag had 13 stars for each existing state versus the 50 that appear on the national flag today. Small border disputes occurred between the states until Pennsylvania’s current boundaries were finalized in 1792. Pennsylvania is officially the Commonwealth of Pennsylvania and its state flag was first adopted in 1799. 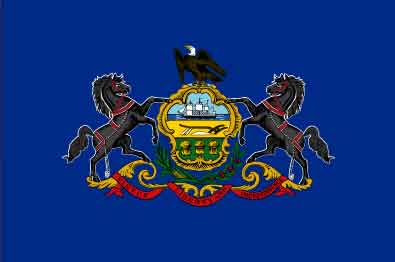 The current design dates from 1907. The flag consists of the state coat of arms, adopted in 1778, on a field of blue. The coat of arms includes a central shield with an American bald eagle, the national bird and animal, perched on top, indicating Pennsylvania’s loyalty to the United States. The shield is flanked by two black horses. The shield includes a ship under full sail, representative of commerce, a plough, for Pennsylvania’s natural resources, and three sheaves of wheat, symbolic of Pennsylvania’s agricultural fertility. A cornstalk, a symbol of prosperity, and an olive branch, a symbol of peace, are found beneath the shield. The state’s motto of “Virtue, Liberty, and Independence” is draped across the bottom on a thin banner of red.

This Army base is the second oldest military base in the country. The first historical reference to it dates back to the Revolutionary War. Located about 20 miles from Harrisburg, the Carlisle Barracks is part of the US Army Training and Doctrine Command and is home to the US Army War College. The campus spreads over 500 acres and provides graduate level courses to prepare senior military officers for leadership roles in the Army. Admission runs around 800 students each year. Students can choose from a 24-month long-distance training program as well as a full-time resident program that runs about 10 months. Graduates of the US Army War College receive a master’s degree in Strategic Studies. Aside from the college, 10 units are located on the base, including the Dunham Health Clinic, the Criminal Investigation Division and the Network Enterprise Center.

Letterkenny Army Depot (LEAD) was originally built as an ammunition depot whose primary mission was to stockpile and/or destroy weapons that could no longer be used during WWII. Today the base functions as the Army’s Capabilities Based Depot. Occupying over 18,000 acres in Franklin County, LEAD is the third largest employer there. The 3,600 employees maintain a unified focus and prides themselves in the part they play in supporting the Warfighters of the United States. Letterkenny was the first depot to receive the prestigious Shingo Prize for Operational Excellence and has received a total of 9 Shingo medallions since 2005.

Located on 850 acres just south of Harrisburg, PA, New Cumberland Army Depot functions as a massive wholesale distribution site for the Department of Defense. They supply repair parts, medical supplies, electronic components and more directly from the manufacturer to units in the US Military and other customers worldwide. This depot is made up of three smaller DoD logistical facilities – Administrative Support Center East (ASCE), Defense Distribution Region East (DDRE), and the headquarters and Defense Distribution Depot Susquehanna Pennsylvania (DDSP). It’s run by 3,000 civilian employees and 100 military personnel.

Under the command of the United States Army, the Tobyhanna Depot is the largest, full service maintenance installation for electronics within the Department of Defense. This highly regarded facility is known for it’s world-class logistical support for military operations and their families. Tobyhanna serves all branches of the US military, providing them with the design, manufacture and repair of high-tech systems used by troops in warfighting operations. Some of the systems provided by this depot include surveillance equipment, night vision, radar systems, satellite parts and guidance systems for telephones and missiles. Personnel here work to ensure American troops are situated with the highest quality C4ISR (Command, Control, Communications, Computers, Intelligence, Surveillance and Reconnaissance),

The objective of the NSA Mechanicsburg has changed often over the years, but in general, they are tasked with supporting whatever local tenants and units are located here at any given time. The facility is largely industrial in nature, containing 150 warehouses making available over 8,800,000 square feet of storage space. It’s the headquarters of the Naval Supply Systems Command, and the parent command of NSA Philadelphia.

The mission for NSA Philadelphia is to provide a secure infrastructure built on a streamlined installation management organization. Dedicated to the quality of life of their military members and civilian staff. The base itself consists of 134 acres of offices and warehouse facilities for the use of the Naval Supply Command. There are two major tenants located here – Defense Logistics and NAVSUP (Naval Supply Command).