Tennessee is a state with a rich military history. Tennessee has many military bases that are located in different cities throughout the state. Some of these military bases have been around for hundreds of years, and some have only existed for less than 50 years. We will be discussing the locations and descriptions of Tennessee’s military bases so you can learn more about your local area as well as those areas outside your home town! Tennessee is home to approximately 435,000 veterans and is bordered by the following states. Kentucky, Virginia, Mississippi, Alabama, Georgia, Arkansas and Missouri. 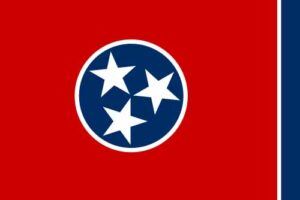 In 1796, Tennessee was admitted as the 16th state in the Union. At that time, the national flag had 15 stars and 15 stripes. It was finally modified to have 20 stars and 13 stripes in 1818, when five new stars were added in the canton for the states of Indiana, Louisiana, Mississippi, Ohio and Tennessee. Tennessee continued to see changes in the national flag until the present 50 star flag During the American Civil War.

Tennessee was part of the Confederate States of America. The first state flag of Tennessee was in use between 1897-1905 and consisted of three diagonal bands of red, blue and white. These represented the three regions of Tennessee. The number 16 appeared on the white portion to signify Tennessee being the 16th state in the Union.
The states nickname of The Volunteer State appeared in gold across the blue portion.

The current state flag of Tennessee was adopted in 1905 and includes a blue and white emblem in the center of a field of red. A strip of blue appears on the fly with a white border. The blue circle in the center has a white border and three white stars inside of it. The three stars represent the three regions of the state: East, Middle and West Tennessee.
The blue circle around the stars represents their unity.

Holston Army ammunition plant is actually under the management of BAE Systems Ordnance, a subsidiary of BAE Systems, Inc. BAE Systems is an industry leader in the management of government-owned munitions sites for the US Military. They have run the Holston Ammunition Plant since 1999. It operates on two sites, with Plant A being in Kingsport and Plant B which is 4 miles outside of Hawkins County. Both plants connect to each other via railroad. The plant has many capabilities, including melt-cast and cast cured extruded explosives, recrystallization and purification from organic solvents, production and development of insensitive munition explosives and more.

Located 26 miles north of Jackson, the Milan Army Ammunition Plant spans about 22,300 acres. The installation is well situated for easy transportation due to its location near several interstate highways and railroads. This makes it an ideal place to fulfill its role of loading, assembling, packing, shipping, receiving and storing containerized ammunition for the Department of Defense, the US Army and other branches of the US Military. The plant also is responsible for demilitarization and disposal, renovation and reclamation, development and production and logistical support.

Arnold AFB is famous for being the most advanced professional flight simulation center in the world. The Arnold Engineering Development Center (AEDC) is the primary inhabitant of the base. Their mission is to test and evaluate all kinds of aircraft, missile and space systems in the exact flight conditions they will experience during a particular operation. They do this by utilizing over 60 propulsion wind tunnels, rocket test cells, turbines, space chambers and ballistic ranges located on base. AEDC also runs a research and technology program to create advanced testing techniques and instrumentation for the design of updated facilities. Employees here are continuously improving their technology to keep up with new technologies in aircraft, missile and space system requirements.

NSA Mid South has over 30 commands based here, making it the largest inland Naval base in the United States. Major commands located here include the Navy Personnel Command, Navy Recruiting Command, the Navy Manpower Analysis Center and Bridge Company C, 6th ESB, 4th Marine Logistics Group. The base is under the command of the US Navy but the Army also has some units based here, including the Army Corps of Engineers Finance Center. The main mission of the base is to provide logistical and operational support to the large number of units and commands that are located here.