Minnesota has a population of over 5.6 million people. The state is bordered by Wisconsin, South Dakota, North Dakota and Iowa. Minnesota was made a territory in 1849 and admitted as the 32nd state in 1858. That same year, a 32nd star was added to the national flag. Minnesota continued to see changes in the national flag until the present 50 star flag. The first state flag of Minnesota was adopted in 1893. It was white on one side and light blue on the other. In the center was the state seal surrounded by moccasin flowers on a blue field. The sun on the horizon in the seal represents summer in the northern hemisphere. 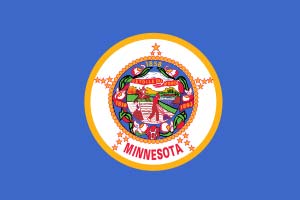 The Native American on horseback is riding towards the south in the background while the farmer is plowing his field in the foreground. The stump represents the lumber industry. The Mississippi River is depicted along with St. Anthony Falls. The plow and cultivated ground represent the importance of agriculture. Pine trees appear in the distance. A red ribbon in the seal states in French “The North Star.” The years 1819, the year Fort Snelling was established, 1858, the year of statehood, and 1893, the year the flag was adopted, appear in gold around the state seal.

Minnesota was written under the seal and 19 gold stars arranged in clusters to form points of a star surrounding the central emblem. This represented that Minnesota was the 19th state admitted to the Union after the original 13 states. The flag was redesigned in 1957, eliminating the different colored sides in favor of blue on both. The current modification of the flag was adopted in 1983.

Camp Ripley is a 53,000 acre with state-of-the-art ranges and training areas to support the requirements of various military and civilian agencies. In 2019, Camp Ripley engineered more than 395,000 man-days of military training and over 61,000 man-days for state and local partners. The 1st Armored Brigade Combat Team and the 2nd Infantry Brigade Combat Team also completed various warfighting exercises on the property. It’s not only the Minnesota National Guard that trains here. It also offers training for US Navy divers from the Mobile Diving and Salvage Unit Two, the Minnesota Department of Transportation, the Minnesota State Patrol and the Department of Natural Resources. In 2020, the camp plans to focus its efforts on upgrades and improvements to some of its facilities, including building a brand-new fire station.