The state of Delaware is the second smallest state in the U.S. and the 45th most populated. Delaware is a state rich in history it was the first of the 13 original states. Delaware join the Union on December 7th, 1787.  Delaware has a population of about 950,000, while being the sixth most densely populated state. Delaware is located in the Northeastern United States and is surrounded by Pennsylvania, New Jersey and Maryland. 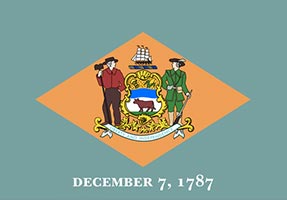 The Delaware state motto is, “Liberty and Independence”, it is proudly written across the bottom of the seal. At the bottom is written December 7th, 1787,  in white outside of the diamond. This is the date Delaware ratified the Constitution and became a state.

Dover AFB began its existence in March of 1941. After the attack on Pearl Harbor, the US Army Air Corps identified a need for a training airfield and assumed authority over the municipal airport located in Dover. In present day, it is the Department of Defense’s largest aerial port with over 9,000 Airmen, civilians and families. Its home to the 436th Airlift Wing, also known as Eagle Wing, which reports to 18th Air Force and Air Mobility Command. Eagle Wing consists of Maintenance, Operations, Medical and Mission Support Groups, and is tasked with maintenance and operation of the C-5M Super Galaxy and C-17 Globemaster III aircraft. The 436th is always ready to provide combat-ready support wherever called upon.

The 512th Air Wing (Liberty Wing) Air Force Reserve unit works closely with the 436th AW, working to maintain and operate the C-5M and C-17 aircraft used by the 436th. The two units together represent a full 20% of the United States airlift capability. Each year they fly hundreds of missions to over 100 countries transporting outsized cargo and personnel.

Dover Air Force Base also serves as the extremely important Air Force Mortuary Affairs Operations center (AFMAO). Dover serves as the nation’s only port mortuary. The AFMAO welcomes home our fallen heroes and ensures their remains are treated with the dignity and honor due to those who have made the ultimate sacrifice. The AFMAO also gets assistance from the JPED (Joint Personal Effects Depot). The JPED takes great care to process the personal effects of the fallen from all branches of the military as well as Department of Defense civilians and contractors killed in the line of duty. They also work closely with the families, giving them the support they need while attending the dignified transfers.

The Armed Forces Medical Examiner System located on base is in charge of forensic investigative services including pathology, toxicology, DNA and mortality surveillance. Their job is to identify the fallen and investigate deaths when the need arises. Not only do they support all branches of the military, but they also support the entire Federal Government.