Oklahoma military bases are represented by the Army, Air Force and Coast Guard. Oklahoma is home to over 340 thousand veterans. The state is bordered by Colorado, Kansas, Missouri, Arkansas, Texas , and New Mexico.

Oklahoma was recognized as the 46 state in 1907. The following year, in 1908, a 46-star was added to the national flag. The flag of the first state of Oklahoma was adopted in 1911, four years after 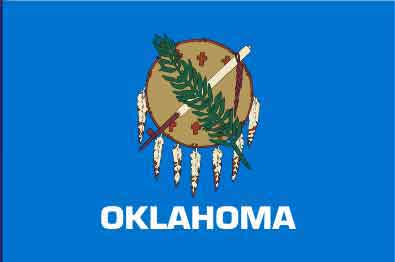 the state was established. using Colors of the national flag, a central white star featured with a blue border on Field red. Number 46 has appeared in Blue Inside the Star since she was in Oklahoma at 46 Country. The current flag was originally adopted in 1925 and features a blue sky field with An American buffalo skin shield is at the center. The shield symbolizes protection, Whereas the pipes and olive branch represent peace. Seven eagle feathers are attached to Buffalo skin. The word Oklahoma in white was added to the flag in 1941 and in color Designs are standardized in 2006.

Fort Sill is a very old Army base, dating back to the American Indian wars. This base has been involved in every major military conflict since 1869. Today it serves as the artillery training center for the United States Army and Marine Corps. Their specialized training approach toward preparedness makes it known as one of the bests posts in the world. Fort Sill is the home of the US Army Field Artillery School and the US Army Air Defense Artillery School. It also serves as one of the four locations used for Army Basic Combat Training in the country. Any soldier that specializes in Field Artillery has received their skills training here at Fort Sill.

Located in central Oklahoma, the Army uses this installation as a place to manufacture, renovate and store conventional ammunition. In fact, this is the largest storage facility for conventional munitions in the Department of Defense. It is comprised of over 2,400 igloos and 2,891 buildings for a total storage capacity of 8,840,449 square feet. Other responsibilities of the McAlester Army Ammunition base is the disposal and demilitarization of weapons, the training of service members on the proper procedures for weapons and research for the advancement of environmental protection.

Altus AFB has been an important force in southwestern Oklahoma for the past 75 years. The base experiences great flying weather over 300 days per year, and the landscape is flat with few obstructions. This makes it a great place for young pilots to master their flying skills. The primary unit based here is the 97th Air Mobility Wing which is in charge of training over 3,000 students a year on C-17 Globemaster III, KC-46 and KC-135 aircraft. The unit as a whole maintains about 550 mobility positions that are ready for immediate deployment. At any given time the 97th Mobility Wing has an average of 150 personnel deployed overseas, and has since 2001.

Tinker AFB is located just five miles from Oklahoma City and is named in honor of Major General Clarence L. Tinker, the first Native American to achieve that rank. The host organization for Tinker AFB is the 72nd Air Base Wing, and they work to support all other units on base. Other units based here include the 76th Maintenance Group, the 448th Supply Chain Management wing and the Oklahoma City Air Logistics Complex. The OC-ALC, as it’s known, is one of the largest units in the Air Force Material Command and the largest organization based at Tinker AFB. 9,800 military and civilian employees work there to perform maintenance and modifications to KC-135, B-1B, B-52, E-3 and Navy E-6 aircraft. They also provide servicing on a variety of other aircraft engines for the Air Force, Air Force Reserve, Air National Guard and the Navy.

Located in Enid Oklahoma, Vance AFB is host to the 71st Flying Training Wing. The mission of this base and the 71st Training Wing is to produce high-caliber military pilots using joint specialized undergraduate pilot training (JSUPT) for qualified officers. Service members from the Navy, Air Force, Marine Corps, Air National Guard, Air Force Reserve and several allied countries all come here to train using the latest tactics and techniques available. Vance AFB is also an active Terminal Radar Approach Control (TRACON) base, second only behind Nellis AFB located in Nevada. TRACON is a facility run by the FAA that uses air traffic controllers who utilize radar and radios to guide aircraft up to an altitude of 10,000 feet but not lower than 2.500 feet. Their main purpose is to monitor traffic in and around busy airports, ensuring there is a safe separation between aircraft as they approach for landing.

This is a relatively new installation, with its beginning dating back to 1994. Authorities became concerned about the number of large containers that were making their way into the ports of the United States with little to no regulation. The Container Inspection Training started with simple inspections; however, it has evolved into the handling of potentially dangerous materials. This team is responsible not only for inspecting containers for hazardous substances, but also transporting them at sea or other places for destruction as deemed necessary.

The United States Coast Guard uses this facility to support the training operations necessary to keep their members ready to jump into action. In order to become a Guardsman, there are particular skills that you will need to acquire to become a successful field operator. In addition to training here, assistance is also provided to those that want to take classes at a nearby college or university. There are multiple programs here for people to choose from.