Military bases in Nebraska include Offutt Air Force base and Camp Ashland.  Nebraska has a population of 1.9 million people. The state is bordered by Iowa, South Dakota, Wyoming, Colorado, Missouri and Kansas. 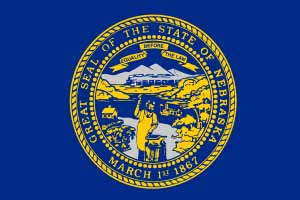 Nebraska was made a territory in 1854 and was admitted as the 37th state in 1867. That same year, a 37th star was added to the national flag.  The state flag of Nebraska was designed in 1925, but was not officially adopted until 1963, making Nebraska one of the last states to adopt an official flag. The flag consists of a dark blue field with the state seal in gold in the center. The seal was adopted in 1867, the same year as statehood. A train steams across the background with mountains in the distance. A steamboat appears on the waters of the Missouri River. A cabin and harvested wheat appear to the left, while a blacksmith works at his anvil in the foreground. A banner at the top of the seal bears the state motto of “Equality Before the Law.” Around the seal are the words “Great Seal of the State of Nebraska” and the date of statehood.

Nebraska’s overall median home value is about $133,000. The state has approximately 17,537 veterans. Below is a map of the military bases locating in Nebraska.

This base has a long, rich history. It’s original name was Fort Crook and it was established in 1890. It played an important role in the 1898 Spanish-American war. During WWI, the 61st Balloon Company was assigned there, and after the war ended, the name was changed to Offutt Field, after the first citizen of Omaha who died in WWI. As WWII approached, a bombardment plant was built here, which produced 500 B26 Marauder and B29 Super-fortress planes over the course of the war. Two of those planes were called the Bockscar and Enola Gray, the bombers called upon to drop the nuclear bombs on the Japanese cities of Nagasaki and Hiroshima. Currently the 55th Wing is the host unit of Offutt Air Force Base. The 55th Wing consists of a mission support, communications, maintenance, electronic combat and medical group. The operations group of the 55th Wing works with 13 different types of aircraft, for a total of 46 planes.

Used as an Army National Guard facility for over 100 years, Camp Ashland is located on the banks of the Platte River near Ashland, Nebraska. Today it is home to the 209th Regional Training Institute (RTI), which consists of Headquarters (HQ), 209th RTI, 1/209th RTI (NCO Academy), 2/209th RTI (OCS/WOCS), 3/209th RTI (88M), and Camp Ashland Training Site Command (CATS). Training occurs here year-round and it’s considered one of the most important military training centers in the Midwest. On any given weekend you’ll see anywhere from 300 to 1,000 service members here, and more than 80,000 troops train here every year. In order to enter the camp, you must possess United States Department of Defense identification, it is not open to the public. Camp Ashland has always been first and foremost a training site for the Nebraska National Guard, however other National Guard units and joint military force training exercises are run here. The Civil Air Patrol, JROTC and Boy Scouts have also been known to utilize the facility.