Welcome to our Kansas military bases information page.  In 1803, what is now Kansas was purchased by the United States from France as part of the Louisiana Purchase. Kansas was made a territory in 1854 and admitted as the 34th state in 1861 just prior to the American Civil War. That same year, a 34th star was added to the national flag. Kansas is bordered by Nebraska,  Missouri, Oklahoma and Colorado. 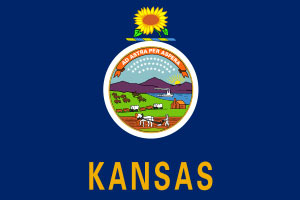 The Kansas state flag was designed in 1925 and adopted in 1927. The word Kansas was added in gold in 1961. The flag consists of a field of dark blue with the state seal in the center, mounted by a sunflower. The seal includes a landscape with a rising sun, a river and steamboat representing commerce, a settler’s cabin and man plowing a field representing agriculture, a wagon train headed west, representing American expansion, and a Native American hunting buffalo. The 34 stars at the top signify the fact that Kansas was the 34th state admitted to the Union. The state motto appears in Latin, which translates as “To the Stars through Difficulties.”

Fort Leavenworth is the oldest US Army Post west of the Mississippi, having been established in the year 1827. Known as the “Intellectual Center of the Army”, Leavenworth is home to the US Army Command and General Staff College. The Staff College offers graduated schooling for US soldiers and students from our allied countries. This school is responsible for training almost all Majors in the Army. Other major units located here include the Combined Arms Center and the Disciplinary Barracks (also known as the DB). The DB is also a Kansas military prison responsible for the military’s only maximum-security facility. Commissioned Officers, service members convicted of endangering national security and enlisted male troops who convicted at court martial with sentences over 10 years long are usually are referred to incarceration at Leavenworth.

One of the largest military facilities in the United States, Fort Riley covers over 100,000 acres in northeastern Kansas. It hosts over 18,000 active duty service members and almost 25,000 family members. That doesn’t include the 8,000+ civilian employees and National Guard and Reserve recruits that train here. Fort Riley is an older base, established in 1887. During WWI over 50,000 soldiers were stationed here, and it’s generally believed that the Spanish Flue pandemic of 1918 began here. Today it’s home of the 1st Infantry Division, and they work to uphold Fort Riley as an Installation of Excellence.

Considered an extension of Fort Riley, Great Plains Joint Training Area give military and civilian groups the opportunity to train and respond to simulated real-life situations. It’s really the mainstay reason the Kansas Army National Guard can stage pre-mobilization training prior to overseas deployment. Smoky Hill Weapons Range, located here, is the busiest Army National Guard bombing range in the country. It occupies 51 square miles and is the location of “Crisis City” – a facility set up to prepare soldiers for national disaster and possible terrorist attack training. Since this facility is used by government, military and civilians, it’s considered a joint base.

The 22nd Air Refueling Wing is the host unit at McDonnell AFB. The 22nd is made up of 6 different groups including Operations, Medical, Mission, and Maintenance groups, plus helping agencies and various wing staff agencies. A few other tenant units also occupy the base, including the 931st Air Refueling Group and the 184th Intelligence Wing. McConnell AFB has a very clear objective – to support refueling requirements for all types of aircraft. They go where they are needed on a global scale in all sorts of climates and weather conditions. The 22nd operates and maintains the KC-46A Pegasus aircraft, the next generation aircraft offering advanced cargo and aeromedical evacuation and refueling capabilities.