Welcome to our Iowa military bases page. The great state of Iowa is a Midwestern state bordered by Nebraska, Minnesota, Illinois, Missouri, Wisconsin and South Dakota. Iowa has a state population just over 3 million people. Iowa is known for its friendly people and its agriculture.

The land that is now the state of Iowa was purchased from France by the United States in 1803 as part of the Louisiana Purchase. Iowa became a territory in 1838 and was admitted as the 29th state in 1846. The following year, in 1847, a 29th star was added to the national flag. Iowa continued to see changes in the national flag until the present 50 star flag. The state flag of Iowa was adopted in 1921 and consists of a vertical tricolor of blue, white, and red, a reference to Iowa’s historic connection with France as part of Louisiana. A bald eagle, the national bird, holds a ribbon that states, “Our liberties we prize and our rights we will maintain,” which was taken from the seal of Iowa. The word Iowa is below that in red. 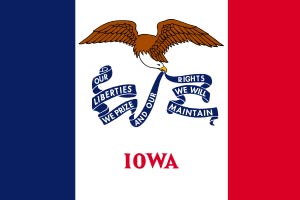 Below are locations for the Iowa military bases and a brief description of each.

Camp Dodge is home to the 185th Regiment and is the headquarters of the Iowa National Guard. Located in Johnston, the camp’s main focus is to provide training for law enforcement, military and government agencies. Along with the 185th, the 2nd Brigade Combat team and the 34th Infantry is also located here. This center is also involved in the fight against substance abuse and drug trafficking in the country. The National Guard Counterdrug Program works closely with local law enforcement, providing the very best training equipment and access to the Midwest Counterdrug Training Center. Camp Dodge is also home to the Gold Star Museum, where memorabilia and historical artifacts tell the story of Iowa’s military history.

Fort Des Moines history dates back to the early Civil War, with construction starting in the year 1843. It was considered an important base during the Civil War, and still displays a number of historical landmarks in honor of that history. It’s gone through a number of changes since then, housing both cavalry and infantry units before becoming a training ground for African American soldiers during WWI. Fort Des Moines is now part of Camp Dodge.

The IAAAP is a subordinate facility of the Joint Munitions Command (JMC) headquarted at the Rock Island Arsenal in Illinois. Located on over 19,000 acres, IAAAP consists of 767 buildings, 271 igloos and a storage capacity of over 1,100,000 square feet. The facility sports 143 miles of roads and 102 miles of railroads. IAAAP produces tank ammunition, missile warheads and mortars of medium and large caliber.