Welcome to our Arkansas military bases page. In Arkansas, there are over 252,000 veterans. These brave men and women have served our country in wars around the world, protecting our freedoms. Arkansas is surrounded by neighboring states Missouri, Tennessee, Mississippi, Louisiana, Texas, and Oklahoma.

The state flag of Arkansas was first adopted in 1913 and slightly modified to its current version in 1924. The first flags in what is now the American state of Arkansas were those of the European colonial empires of the French and Spanish that explored, settled, and traded there. The land that is now the state of Arkansas was purchased from France by the United States in 1803 as part of the Louisiana Purchase. Arkansas became a territory in 1819 and was admitted as the 25th state in 1836. That same year, a 25th star was added to the national flag. Arkansas continued to see changes in the national flag until the present 50 star flag. During the American Civil War, Arkansas was part of the Confederate States of America. 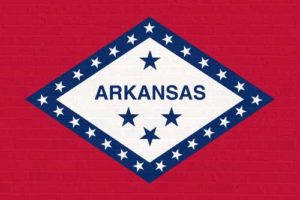 Arkansas currently has two primary military bases and the other is now a training camp, below is more information about the military bases in Arkansas.

Map of Military Bases in Arkansas

The camp was originally opened in 1941 and then renamed Fort Chaffee in 1956 from previously being called camp Chaffee.  The Arkansas Army base is now primarily being used by the Arkansas National Guard as a training camp.
Fort Chaffee Army Base

Little Rock AFB is the only base within the Department of Defense to work with the C-130 military transport aircraft. Not only does it train US forces, but also services the 31 allied countries of the United States. It is the home base of the 19th Airlift Wing which reports to the Air Mobility Command. The 19th Airlift Wing is tasked with providing mission ready personnel and supports the largest fleet of C-130’s in the world. They provide humanitarian relief to disaster victims and airdrop troops into military operations in enemy territory.

Also based here are the 314th Airlift Wing (Air Education and Training Command), 189th Airlift Wing (Air National Guard) and the 913th Airlift Group. These three units train C-130J crews from the US and our allies, and provides combat airlift capability on a global scale. Working closely together with the 19th Airlft Wing, these groups train and deploy the best C-130 Combat Airlifters in the world.

In addition to the above, Little Rock Air Force Base is also host to two Tenants. The first, the 373rd Training Squadron Detachment 4, trains both Mission Ready Airmen and new students directly from school at Sheppard Air Force Base through a 17-day academic course where upon completion they receive a 3-skill level aircraft maintenance badge. The 373rd TRS supports more than 80 Active, Guard and Reserve C-130’s around the world.

The second Tenant is the 29th Weapons Squadron. The 29th WPS runs the C-130 Weapons Instructor Course, a course open only to the very best, top tier instructor pilots and navigators. Weapons undergraduate pilots, known as WUGS, are trained to become the very best tactical experts in battle-space dominance and require a well-rounded knowledge in all aspects regarding the C-130.

PBA is located about 35 miles southeast of Little Rock, and is known as one of only 9 installations that have the ability to store chemical weapons. It was first established as a Chemical Warfare Arsenal at the beginning of the US involvement of WWII. Today it supplies the US and Allied Forces with critical products and also provides training and support to the Department of Homeland Security and the American Red Cross. It is a closed post, meaning that security clearance is required to enter the installation. It is home to conventional ammunition as well as chemical biological defense.