Welcome to our Indiana military bases page. Indiana is a state rich in history. The Hoosier state is home to great basketball and the Indy 500.  Indiana has a population of over 600 million people. The state was admitted to the union December 11, 1816 and was the 19th state at the time. Indianapolis is the state capitol and has been since 1825. The states that border Indiana are Illinois, Michigan, Ohio, and Kentucky.

The first flags in what is now the American state of Indiana were those of the European colonial empires of the French and British that explored, settled, and traded there. At the conclusion of the American Revolution in 1783, the land that is now Indiana became part of the initial territory of the new United States of America. Indiana became part of the Northwest Territory when it was formed in 1787 and in 1816, Indiana was admitted as the 19th state in the Union. 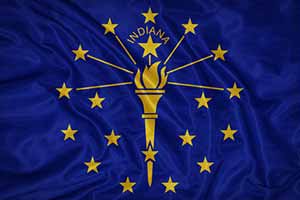 At that time, the national flag had 15 stars and 15 stripes. It was modified to have 20 stars and 13 stripes in 1818, when five new stars were added in the canton for the states of Indiana, Louisiana, Mississippi, Ohio, and Tennessee. Indiana continued to see changes in the national flag until the present 50 star flag. The state flag of Indiana was adopted in 1917 and consists a dark blue field with a gold torch in the center. The torch represents liberty and enlightenment with the rays around the torch signifying their far-reaching influence. The 19 gold stars represents Indiana’s admission as the 19th state to the Union. The word Indiana appears above the torch in gold. The outer stars number 13 for the 13 original states, while the five inner stars represent the next five states added, and the single larger star above the torch represents Indiana.

Located about 12 miles north of Kokomo, Grissom Air Reserve Base is both a military base and civil airport. Along with the Air Reserve, units from the Navy, Army and Marines are all included in the over 2,000 reservists and civilians stationed here. The primary unit calling Grissom home is the 434th Air Refueling Wing. The 434th primary mission is to provide its air refueling services to long-range fighters, bombers and cargo aircraft. They have been active in in many major operations in which the USAF played a role. Grissom also serves as a training ground to prepare reservists for flight operations and deployments.

Built just after the attack on Pearl Harbor in 1941, Camp Atterbury was constructed to host a large army infantry division. Today, the camp serves as the training ground for the Indiana National Guard and other branches of the US Military. Several units call Camp Atterbury home, including the 157th Infantry, 4th Cavalry and 205th Infantry Brigades as well as the Joint Maneuver Training Center. Training facilities located here include live fire ranges for artillery, infantry and tank maneuvers, as well as an aerial gunnery range for A10 Thunderbolts. In fact, in 2003 this base trained thousands of troops in preparation for the Iraq War after the September 11, 2001 attacks. The camp occupies around 30,000 acres and houses almost 45,000 troops and officers.

NSWC focuses on strategic and special missions with regards to electronic warfare. It specializes in technical and engineering purposes, producing the most advanced electronic weaponry, sensors and systems. Under the complete command of the United States Navy, the base employs around 3,500 individuals that operate under the principal that once you obtain technological control of a battle, it is half won. A quick response with an immediate answer is vital, because the faster you react to a situation, the easier it is to gain control. Therefore, a great deal of money is spent on sensors and communication systems built to support that very mission. NSWC is responsible for their products from top to bottom, manufacturing, testing, evaluating and training troops to use the highly sensitive equipment.

This Coast Guard Station has been in operation for over 125 years and is the only Lake Michigan unit in Indiana. Their primary mission is to perform Homeland Security, Search and Rescue, Law Enforcement and Marine Environmental Protection operations as necessary to ensure the safety and security of their charges. After the attacks of September 11th, regular patrols of the Indiana and Michigan lake shores were added as an added protection against possible harm by terrorists. During winter months, service members here are specially trained in search and rescue operations for ice emergencies.