Welcome to our Colorado Military bases page. Colorado was made a territory in 1861 and admitted as the 38th state in 1876. The following year, a 38th star was added to the national flag. Colorado continued to see changes in the national flag until the present 50 star flag. 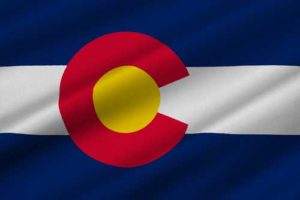 The state flag of Colorado was adopted in 1911. It consists of three horizontal stripes with a letter C to the left center. The white stripe symbolizes the snow on Colorado’s mountains, the gold in the opening of the C represents sunshine, the red signifies Colorado’s red soil, and the blue symbolizes the blue skies.

Colorado is one of the most beautiful states in America with a rich history. The state hosts 7 main military bases. Below is a map of the military bases in Colorado and more information.

The Air Force was not considered an official branch of the US military until 1947. Even before then, many thought it was a good idea that a special school be created with a mission to train military pilots. In 1954, President Eisenhower approved construction of the Air Force Academy, and the first all-male cadet wing of 1,145 students graduated in 1958. In 1976 women were allowed entry in the program, with an outstanding 97% of the first female students graduating. Requirements for admission include being a US Citizen between the ages of 17 and 23 years of age. You also must be unmarried with no dependents. The Air Force Academy is a very prestigious school and it is considered a great honor to attend. It’s located in Colorado Springs, Colorado.

Located just outside of Denver, Buckley Air Force base has gone through many changes. Early during WWII it was purchased by the City of Denver and donated to the Army. The Army then created a large Army Air Force Base, training over 50,000 airmen. After WWII, it became an supplementary airfield for Lowry AFB, an Air National Guard Field and a Navy Air Station all over the course of 3 years. In 2001 it became home to the 460th Space Wing, who is responsible for a giving space-based missile warnings to the Cheyenne Mountain Air Station and the 21st Space Wing at Peterson Air Force Base.

CMAFB is an unusual base in that it lies 600 miles into Cheyenne Mountain. It is one of the toughest military constructions in the USA, and focuses on collecting intelligence data through many different types of satellites, radars and sensors. The location of the base is ideal due to its location in the middle of the continent. It is also in an area with very low seismic activity, which keeps the sensitive technologies secure. Since 2008, CMAFB has served as the NORAD Alternate Command Center and 200 individuals from all four branches of the United States Military live and run the facility.

Peterson AFB is the headquarters of the 21st Space Wing. The 21st is the most widespread wing, with units located in 22 locations over 13 time zones. Its primary mission is to provide America’s first line of defense, executing world-class space combat and base operations. The unit consists of four groups – Mission Support, Operations, Staff and Medical groups, each with specialized tasks. The base also hosts the 721st Operations Group and the 821st Air Base Group. It is located in conjunction the Colorado Springs Airport, and the two facilities share runways.

Groundbreaking for this base took place in 1983, making it one of the youngest in the country. It is located just outside of Colorado Springs approximately 8 miles away from Peterson AFB. It is the host base of the 50th Space Wing, along with tenant units such as the 21st Medical Group, the 50th Space Wing and the 310th Space Wing. The 50th Space Wing is responsible for over 170 satellites and works hard to deliver precision navigation, timing and secure satellite communication. There is no flight line or aircraft missions at Schriever AFB.

Fort Carson is a very popular destination, second only to Fort Lewis as the most requested duty station in the US. Established just after the attack on Pearl Harbor in 1941, it is located in Colorado Springs along with 3 other Air Force Bases and the Air Force Military Academy. Fort Carson is home to many units, including the 4th Infantry Division, 4th Engineer Battalion, 10th Special Forces Group and more. Their mission is to be at the ready to support full-spectrum combat operations and achieve Combatant Commander Objectives. More than 13,000 troops from here were deployed to Iraq in 2003 in support of Operation Iraqi Freedom.

Pueblo Chemical Depot is one of the nine Army facilities in the US to store chemical weapons. Roughly 7% of the nation’s chemical weapon stockpile is stored here, mostly made up of 2,611 mustard chemical agents in 780,000 munitions. The depot is currently in the process of destroying these weapons as part of international treaty obligations. They destroyed the first shells in 2015 but ran into delays the following year. Under current congressional deadline, the plan is required to destroy all remaining shells before 2024.