Liberty and Union Now and Forever, One and Inseparable 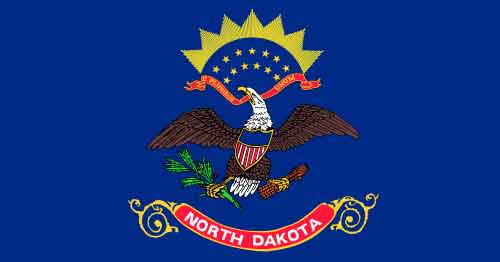 North Dakota was admitted as the 39th state in 1889. The following year, five stars were added to the national flag to account for the new states of North Dakota, South Dakota, Montana, Washington, and Idaho. The state flag of North Dakota was adopted in 1911 and is almost identical to the unit banner carried by North Dakota troops in the Philippines during the Spanish-American War. The flag consists of a field of dark blue with the national symbol of a bald eagle at the center. The eagle holds olive branches and arrows as it does on the national seal and holds a banner with the national motto of “E Pluribus Unum” in its beak.Thirteen stars appear above its head and a thirteen striped shield appears on the eagle’s chest, both representative of the 13 original states. The words North Dakota appear below.

Below is a map of the North Dakota military bases and areas of interest.

Also known as GFAFB, this base is home to the Mission Support Group of the 319th Air Base Wing. The 319 MSP is made up of more than 1,300 soldiers and civilian personnel and is comprised of seven squadrons that provide contracting, communications, logistics, civil engineering and force support functions for equipment valued at over $2.2 billion dollars. Living up to their motto of “Proud to be MSG”, this group also delivers equipment and facilities to support other mission partners including the Department of Homeland Security and Customs Border Protection. A tenant arm of the United States Air Force Office of Special Investigation is also located here, where they work to identify, exploit and neutralize criminal and terrorist threats for the Department of Defense.

Minot AFB is located in the northern sector of North Dakota. The town of Minot petitioned the government to put a base here during the cold war as a deterrent from a northern attack.  The two most important units based here are the 5th Bomb Wing and the 91st Missile Wing. The 5th Bomb Wing’s four groups (medical, maintenance, mission support and operations) work hard to fulfill its mission to operate B52H Stratofortress bombers to provide combat support capabilities to various geographic regions. The 91st Missile Wing, also known as the Rough Riders, are in charge of monitoring the LGM-30G Minuteman intercontinental ballistic missile (ICBM). Minot AFB is one of only three of the USAF’s three missile units that are part of the Air Force Global Strike command.