Maine military bases are part of our North East national defense system. The land that is now the state of Maine, was originally part of the British colony of Massachusetts. In 1776, Massachusetts declared independence from Great Britain, along with 12 other British colonies, becoming one of the original states of the United States of America. At that time, the American flag had 13 stars for 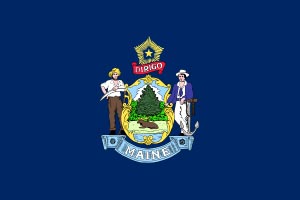 each existing state. Maine was not separated from Massachusetts until 1820 when it was admitted as the 23rd state in the Union. Later that year, two additional stars were added to the national flag for the new states of Alabama and Maine to make a total of 23. Maine continued to see changes in the national flag until the present 50 star flag. The original state flag of Maine was adopted in 1901 and consisted of a field of buff with a green pine tree, a symbol of New England, in the center.

A blue north star appeared in the top left corner. The current state flag was adopted less than a decade later in 1909. It consists of a dark blue field with the state coat of arms in the center. The coat of arms was adopted in 1820, the year of statehood, and includes a central shield flanked by two men. Inside the shield is a scene of a moose resting in a green field bordered by water in the foreground and forest in the background. A pine tree stands directly behind the moose. The man on the left is a farmer, resting on his scythe, while the man on the right is a sailor leaning on an anchor, both representative of the state’s agricultural and nautical heritage. The Latin word for I lead appears above the shield, along with a stylized North Star. The banner below the shield contains the word Maine.

One of the primary military bases in Maine is Portsmouth naval base is located approximately 50 miles away from many major cities in New England, including Boston, MA, Manchester, NH and Portland, ME. Straddling the border of both New Hampshire and Maine, it occupies 54 acres near the mouth of the Piscataqua River. One of the last four operating Naval shipyards in the country, this base is one of the oldest installations in the Navy, dating back prior to the year 1800. The base built several well-known ships here, including the largest wooden ship built onsite (the Franklin), and the USS Constitution, also known as “Old Ironsides”, which is currently stationed in Boston as a museum. Portsmouth NS employees almost 4,000 civilians and has an active apprentice and engineer recruitment center. There are three dry docks and is capable of hosting all types of submarines including the TRIDENT class.

Sector Northern New England is responsible for 5,000 miles of coastline and 11,000 square nautical miles of water spread between Maine, New Hampshire, Vermont and the northeastern corner of New York. Sector Northern NE has 19 sub-units, many of which are located in Maine since that is where most of the coastline resides. In addition to the traditional search and rescue, law enforcement duties, they also assist in transport of over 160 million barrels of petroleum and regulates movement of many sea vessels including tour and fishing boats and ferries. The largest station in Maine is located in Boothbay Harbor, and they are directly responsible for the over 1,000 miles of Maine coastline. The Coast Guard in this location often works joint protection and response missions along the Canadian border and also has an important bond with local Native American Tribal communities.