North Carolina military bases are an important part of our national security. North Carolina is home to over 700 thousand veterans. The state is bordered by Tennessee, Virginia, Georgia and South Carolina. 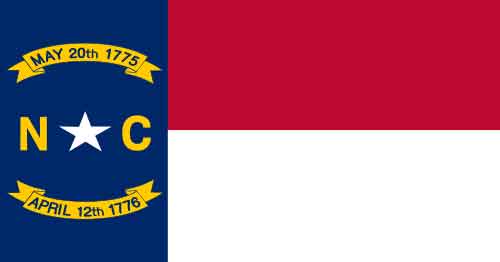 The flag included a vertical red bar, along with blue and white horizontal bars. A white star appeared in the middle of the red bar. The date of May 20, 1775 appeared above the star, referencing the date of the Mecklenburg Declaration of Independence, the earliest known state declaration of independence from Great Britain during the American Revolution. The date below the star of May 20, 1861 references the state’s secession from the Union during the Civil War. The flag was later amended in 1885 to its present state in which the red vertical bar was made blue and the blue horizontal bar made red. This color change was in memory of the Bonnie Blue Flag, a symbol of secession during the Civil War.

The letters of N and C flank the white star. The date of secession was removed and the date of April 12, 1776 replaced it. This date is a reference to another document from the American Revolution, the Halifax Resolves. Both dates were placed in yellow banners.

Camp Butner Training Center occupies just over 5,000 acres in the northern piedmont of North Carolina. It is under the command of the North Carolina Army National Guard. Their mission is to provide high quality small arms ranges and training facilities year-round for the training of Soldiers, Airmen, Department of Defense Agencies, Civil Authorities and Civilian Marksmanship programs. The camp currently plays host to a wide variety of shooting matches, including the Civilian Marksmanship Programs’ Eastern Junior High-Power Clinic and Championship that’s taught by the US Marine Corps Mobile Marksmanship Unit. Other popular events include the CMP’s Eastern Games, the Creedmoor Cup and other sponsored by the Civilian Marksmanship Program (CMP) and the National Rifle Association (NRA).

Located south of Southern Pines, NC, Camp Mackall is home to the US Army Special Forces School. Troops wanting to become a member of the Army Special Forces come here for SERE training (survival, evasion, resistance and escape) at the Colonel James “Nick” Rower Training Compound. This compound is known as “Nasty Nick” and is considered one of the most challenging obstacle courses in the country. SFAS (Special Forces Assessment and Selection) and the Q Course (for qualification) also are located at Camp Mackall. There are also two runways here that make up the Mackall Army Airfield. Runway 4/22 is 5,000 feet long with an asphalt surface, and runway 11/29 is just over 4,700 feet and made of concrete. Camp Mackall is a sub-installation of Fort Bragg, which is located nearby and home to the 82nd Airborne.

Spanning over 251 square miles just west of Fayetteville, NC, Fort Bragg is the largest military installation in the entire country. As part of BRAC 2005, Fort Bragg absorbed the Forces Command (FORSCOM) and the US Army Reserve command (USARC) from Fort McPherson in GA. It currently hosts over 75,000 active duty personnel and is home to the Airborne and Special Operation Force. Host units based here include the US Army Special Operations Command, the XVIII Airborne Corps, the 82nd Airborne Division and the US Army Parachute Team (the Golden Knights). There are also several important tenant units here such as the US Army Medical Command, the Womack Army Medical Center and the JFK Special Warfare Center and School. All units here pride themselves by living in a constant state of readiness, are highly trained and able to fight immediately on arrival by whatever means necessary – land, sea or air day or night.

Military Ocean Terminal Sunny Point was first established as a strategic shipping and military hub in 1725. It’s existed in its present-day form since 1955 and has played a part in every military conflict since then. This base run by the US Army is responsible for being the primary shipping point for ammunition on the East Coast. Sunny Point is capable of hosting up to six ships at the same time in its docks. Along with the small arms ammunition, artillery shells and ammunition for vehicle systems and aircraft bombs, this base is the only installation capable for authorized handling of containerized ammunition. Another important function of Military Ocean Terminal Sunny Point is to act as a rapid deployment point for the 82nd Airborne Division from Fort Bragg as well as other joint forces as necessary.

Pope Field was under the command of the US Air Force until the Base Closure and Relocation Commission of 2005 moved it under the command of the US Army. This base is one of the busiest in the military and is located at the tip of Fort Bragg in Fayetteville. The primary unit hosted here is the 43rd Airlift Wing, with its operations, mission support, maintenance and medial groups located onsite. Their mission is to provide full support to more than 15 other tenant units such as the 53rd Aerial Port Squadron, the 18th Air Support Operations Group and the Golden Knights. The 440th Air Reserve Wing is also based here, working with C130E Herculese aircraft and provides direct support to the 43rd Airling Wing.

Seymour Johnson is an air force base in North Carolina spanning over 3,300 acres in Goldsboro, North Carolina, Seymour Johnson AFB is home to the 4th Fighter Wing. The 4th Fighter Wing is one of two Air Force Units that originated outside of the United States. They were originally American pilots that flew for the Royal Air Force Eagle Squadrons and were transferred here when the United States entered WWII. Today the 4th Fighter Wing has four groups based here – operations, mission support, maintenance and medical. There are four separate squadrons that operate and maintain F-15E Strike Eagle aircraft. Two four squadrons maintain a state of readiness and are capable of deploying at a moment’s notice.

MCAS New River is located on the eastern side of Jacksonville North Carolina and is primarily designed to accept helicopters operated by the US Marine Corps. It is the home of Marine Aircraft Group 26 and Marine Aircraft Group 29, as well as the 362nd Training Squad, the Marine Wing Support Squadron 272 and other small units and tenants. This base holds the distinction of being the first to train with the MV22 Osprey. The Osprey is unique in that it takes off and lands like a helicopter but otherwise handles just like a plane. The main mission of MCAS New River is to support combat readiness of the Marine Corps Aviation Combat Element.

MCAS Cherry Point can best be described as the sign that adorns the base stating “Pardon our noise, it’s the sound of freedom”. Cherry Points primary mission is aerial wartime emergency readiness. Its main host units are Aircraft Group 14, Wing Support Group 27 and Air Control Group 28. One of the most important facilities, the Fleet Readiness Center, is also based here at MCAS Cherry Point. FRCE is a repair and maintenance facility that is run by the US Navy. It’s one of only six such centers in the country and has been active since the 1940s. Their main focus is the maintenance and repair of vertical lift aircraft.

The NSF is under the command of the United States Coast Guard. Their job is to uphold the mission of being “Always Ready” to step in for any hazard that threatens the safety of our environment and/or the health of the American people. Oil spills are obviously a large concern of the NSF, but the Strike Force is also responsible for the mass destruction of any weapon that might affect the general population. It doesn’t matter if the threat is from an actual attack or a test gone wrong, these troops are always ready to jump in and provide support. They also provide training for soldiers of all branches of the armed forces, so they are able to help if the need arises. NSF Coast Guard hosts about 200 people, including military, civilian and reserve troops among five different teams, with the main one being the NSFCC Coordination Center.

This Coast Guard Base is in charge of operations in multiple areas around the country as well as performing missions in the Caribbean, Greenland and the Azores. Utilizing their advanced training, soldiers here perform a variety of missions, including search and rescue, law enforcement operations and anything dealing with national security. They also monitor the environment against anything harmful, such as oil spills or leaks of toxic substances. Another very important function of this air station is ice patrol. After the Titanic hit an iceberg and sank in 1913, the Coast Guard began monitoring large icebergs and relaying the information to maritime experts in an effort to make the seas safer for crossing ships. This installation supports their efforts with four helicopters and five other aircraft in addition to their fleet of boats and cutters.