New Hampshire military bases are an important component for the protection of the north eastern coastline.  New Hampshire has a population just over 1.3 million people of those over a 100 thousand are veterans. New Hampshire is bordered by Maine, Massachusetts, Connecticut and Vermont. 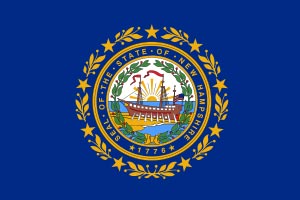 In 1776, New Hampshire declared independence from Great Britain, along with 12 other British colonies, becoming one of the original states of the United States of America. At that time, the American flag had 13 stars for each existing state versus the 50 that appear on the national flag today. The state flag of New Hampshire was adopted in 1909 and consists of the state seal centered on a field of blue. The seal includes the frigate USS Raleigh and is surrounded by a laurel wreath with nine stars. The Raleigh was one of the first warships commissioned by the Continental Congress during the American Revolution and built in 1776.

The laurel wreath is associated with ancient Rome and is a symbol of honor and victory. The nine stars within the wreath signifies that New Hampshire was the ninth state to ratify the Constitution and join the Union.

This base is located approximately 50 miles away from many major cities in New England, including Boston, MA, Manchester, NH and Portland, ME. Straddling the border of both New Hampshire and Maine, it occupies 54 acres near the mouth of the Piscataqua River. One of the last four operating Naval shipyards in the country, this base is one of the oldest installations in the Navy, dating back prior to the year 1800. The base built several well-known ships here, including the largest wooden ship built onsite (the Franklin), and the USS Constitution, also known as “Old Ironsides”, which is currently stationed in Boston as a museum. Portsmouth NS employs almost 4,000 civilians and has an active apprentice and engineer recruitment center. There are three dry docks and is capable of hosting all types of submarines including the TRIDENT and Los Angeles Class. In fact, this facility is responsible for repairing and maintaining many of the Los Angeles Submarines belonging to the Atlantic fleet.