Welcome to our Maryland military bases information page. It all began in 1776. The state that is now known as Maryland declared its independence from Great Britain, along with 12 other British colonies, becoming one of the original states of the United States of America. The state flag of Maryland was officially adopted in 1904 and consists of the heraldic banner of George Calvert, First Baron Baltimore. 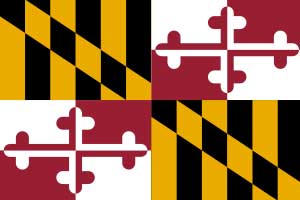 Calvert sought the royal charter for the region that would become the state of Maryland in the early 17th century. His heraldic banner includes the black and gold coat of arms of the Calvert family. The vertical bars represent the bars of a wooden palisade wall. This association originates from Calvert’s storming of a fortification during a battle. The red and white coat of arms belonged to the family of Calvert’s mother, the Crossland family. Maryland’s flag is the only state flag based on English heraldry and only one of four American state flags that does not contain the color blue. Although the flag was not officially adopted until 1904, it had flown before in a parade in 1880, marking the 150th anniversary of the founding of Baltimore.

It also flew in 1888 at Gettysburg Battlefield when ceremonies were held to dedicate monuments to Maryland regiments of Union Army. From this history Maryland military bases were born.

Maryland military bases are a very important part, not only defending the northeastern part of the united states but our nation as a whole. Maryland has a population of just over 6 million people. Surrounding states include Pennsylvania, Delaware, Virginia and West Virginia. Below are locations and history information about a few of the more popular Maryland military bases.

A popular air force base in Maryland is Andrews AFB.  Andrews Naval Air facility is by far one of the most recognizable Air Force bases in the country. In October 2009, it was merged with the Naval Air Facility Washington to create Joint Base Andrews Naval Air Facility, but most people still call it Andrews or Joint Base Andrews. Its home to the 11th Wing, whose mission is to work with the US and our allied nations in support of operations around the world. Other units based here include the 459th Refueling Unit, the 89th Air Lift Wing and the 79th Medical Wing. Andrews also coordinates the movement of the President, Vice President, Congress and other high-ranking officials. Andrews AFB can process as many as 20-30 Distinguished Visitors each week.

This base is the oldest proving ground in the United States Army. It occupies more than 72,000 acres across two peninsulas separated by the Bush River. Half of those 72,000 acres is either wetlands or actual water. The proving ground has 300 miles of road and 567,000 square yards of airfield pavement. The mission here is to provide testing and support services to authorized organizations, including those both in and out of the Department of Defense, domestic and foreign. The employees here pride themselves on providing real and simulated test data supported with expert knowledge and technical services. Items tested here fall under any number of categories, including leading edge instrumentation, manufacturing and fabrication, as well as emerging technologies.

Located in Frederick, Fort Detrick is a US Army Medical Command installation. All branches of the US military have representatives here, making up some 7,800 military, federal and contractor individuals stationed here. It is the largest employer in the State of Maryland. Originally constructed to be the center for biological weapons in the United States, today Fort Detrick is an Army Medical Research and Material Command facility. They specialize in biomedical research, communications and the study of foreign plant pathogens.

Fort Meade is an Army facility that is part of the Northeast Region (NERO) within the Installation Management Command (IMCOM). It’s a large base, employing over 9,000 military personnel and almost 32,000 civilian employees. It’s an excellent facility providing homes to various national centers of intelligence and information. Organizations located within Fort Meade’s jurisdiction span all military branches as well as other agencies such as the US Cyber Command, Defense Information School, US Army Band and the National Security Agency. The mission of the base is to provide immeasurable support to all organizations located within its boundaries.

The only shipbuilding installation in the Coast Guard, this base is located in Curtis Bay just outside of Baltimore. The mission of Coast Guard Yard is to support the armed forces with the development and repair of various types of ships. There are several centers around the country that deal with small repair operations, but Coast Guard Yard is different. The experts here are dedicated to envisioning new techniques and ideas to meet future challenges of the military. Their importance is vital to the mission and vision of the US Coast Guard.

This logistics center operated by the United States Coast Guard is the most important logistics center in the country. It’s responsible for coordinating the information and equipment needed to carry out various missions that fall under the jurisdiction of the Coast Guard. They feed information and direction to 242 cutters and over 1,800 boats stationed throughout the country. There are six divisions located at Surface Forces, each with their own responsibilities and areas of expertise. Their responsibilities do not overlap, but they work in very close communications to keep the fleet running smoothly.

The US Naval Academy was established in 1845 and is the second oldest of the five academies in the country. Considered one of the most prestigious academies in the country, its mission surrounds preparing young men and women to come Naval and Marine Corps officers. Admission requires a nomination, often from a member of congress, but you must apply onsite. Students typically attend the academy for four years and graduate with a Bachelor of Science and commissions as second lieutenants in the Marines or ensigns in the Navy. If you garner a nomination and decide to attend, tuition is free in exchange for service after graduation. Out of the 1,300 students who begin a typical year, approximately 1,000 will actually graduate.

Considered a flagship medical center under the command of the US Navy, this facility is the oldest continuously operating hospital as they’ve been serving military families since 1830. Also known as the Bethesda Naval Hospital, is considered a premiere hospital and one of the most renowned in the world. 4,500 medical professionals work to provide top of the line medical care, advanced medical research and teaching programs to nurses, doctors and hospital corpsmen. Bethesda provides care for presidents and other top leaders of the country, and has for the past 65 years. In 2011, this hospital was merged with Walter Reed and renamed The Walter Reed National Military Medical Center.

NAS Patuxent River, or NAS Pax River as it is also known, is held in high esteem due to the Test Pilot School located on site here. The School works to train the finest developmental test pilots, engineers, and flight officers. The Test Pilot School at Pax River is highly competitive. In fact, it has graduated more than 90 NASA astronauts to date. NAS Pax River also plays host to the Naval Air Systems Command (NAVAIR) and the Naval Air Warfare Center Aircraft Division (NAWCAD). NAVAIR is responsible for the acquisition, research and development, test and evaluation, engineering and fleet support of both manned and unmanned aircraft for the US Navy. NAWCAD works for engineering, design, development and testing of the Navy’s Aircraft Launch and Recovery systems, Air Vehicle Engineering and Air Vehicle Modification and Instrumentation. All in all, NAS Pax River performs more than 165,000 air operations daily within their 780 square miles of restricted airspace and 5,000 square miles of controlled airspace.

NSA Annapolis is one of the largest bases owned by the US Navy. It’s located across the Severn River from the US Naval Academy. The mission of NSA Annapolis is to provide operational support to units and tenant commands assigned to it, such as the US Naval Academy, Chesapeake Bay Detachment, the North Severn complex and the Navy Operations Support Center in Baltimore. The Blue Angels are famous for the shows they put on here, and each event brings together impressive numbers of military and civilian fans alike.

The mission of NSF Indian Head is of the utmost importance to the United States Navy. Those stationed here can boast impressive scientific backgrounds, and their job is to develop, test and maintain some of the most successful explosives in the world. The base itself spreads over more than 3,000 acres and includes several test ranges. The focus is on traditional weaponry as well as chemical and biological agents.

The official name of this installation is Naval Support Facility Thurmont, but most everyone knows it by its other name, Camp David. Camp David was founded in 1942 as a getaway place of rest and relaxation for the President of the United States. The Camp is officially operation by Navy and Marine Corps personnel, who provides an especially high level of security. Often Presidents host high-powered meetings here. For example, President FDR and Winston Churchill planned the Allies Invasion of Europe here during WWII. Other important historical events, such as the planning of the Normandy invasion, Bay of Pigs and discussion surrounding the Vietnam War have taken place here as well.