Ohio Military bases include Wright Patterson Air Force Base and Youngstown Air Reserve Station. The state of Ohio is home to more than 800 thousand veterans. Ohio is bordered by  Michigan, Indiana, Kentucky and West Virginia. 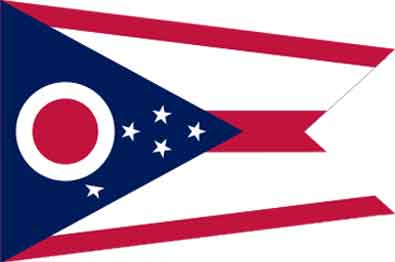 Ohio became part of the Northwest Territory when it was formed in 1787 and in 1803, Ohio was admitted as the 17th state in the Union. At that time, the national flag had 15 stars and 15 stripes. It was finally modified to have 20 stars and 13 stripes in 1818, when five new stars were added in the canton for the states of Indiana, Louisiana, Mississippi, Ohio, and Tennessee. Ohio’s state flag was adopted in 1902 and is unique among American state flags in that it has a swallowtail pennant design rather than the usual rectangular shape. The flag includes a blue triangle that represent the state’s hills and valleys. Five stripes of red and white represent the roads and waterways. The number five alludes to the fact that Ohio was one of five states formed from the Northwest Territory (the others being Michigan, Indiana, Illinois, and Wisconsin). Inside the blue triangle is a red circle with a white border that recalls the state’s nickname of The Buckeye State. The 13 white stars on the left represent the 13 original states, while the four stars to the right raise their number to 17, signifying Ohio’s admission as the 17th state in the Union.

Home of the 88th Air Force Wing, Write Patterson AFB  is one of the premier Ohio air force bases. Write Patterson is located close to Dayton Ohio and spreads over two counties. Named for Orville and Wilbur Wright, who are credited with building the first successful airplane and Frank Patterson, who unfortunately died during a test mission in 1918. Wright Patterson is the largest military base under the command of the USAF and home to the USAF School of Aerospace Medicine. The school researches aerospace medical and aircrew health assessments and trains over 6,000 students each year. The primary host unit, the 88th Air Force Wing, is in charge of all operations to keep the airfield running smoothly. They maintain all infrastructure and provide security, communications, air traffic control and weather forecasting service for the more than 100 units and tenants located on base. This wing is under the command of the Air Force Life Cycle Management Center.

This Air Force Reserve station is host to the 910 Airlift Wing (910 AW). Located at the Youngstown-Warren International Airport, the 910th AW trains and supports readiness forces in airlift and aerial spray operations. During wartime, soldiers here will utilize the C130 Hercules aircraft for combat and tactical airlift operations. They are highly trained to perform low-level penetration into combat situations for delivery of equipment, materials and personnel by both land and air.

This center, like many others of its kind across the country, is tasked with general support of the US Coast Guard. ISC Cleveland is responsible for the State of Ohio alone. Not only does it help with military and civilian actions, it also is responsible for veteran and retired personnel support.